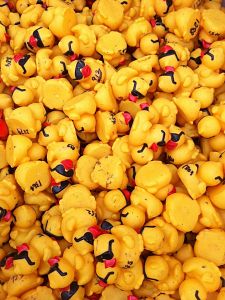 We're delighted to report that the race was a quacking success yet again! It was a wonderful milestone for us too, with the race in its 18th year.

We're immensely thankful for all who helped us put on this EGGScellent event, including our sponsors Gallagher and the Kentish Gazette, the amazing folk from Canterbury Lifesaving Club who stopped our ducks going astray, our cheerful first aiders from St John Ambulance who were there if needed, the folk from Westgate Parks, Canterbury City Council and of course a whole bunch of Rotarian and Inner Wheel volunteers and helpers who helped with the 'sale' of ducks and who were keeping an eye on proceedings during the day - especially those who were at the end of the race (PPs Sharon Jordan, Martin Ward, Alastair Scott, Richard Kemball-Cook and former Rtn Mark Esdale) making sure all the ducks got back home safely. Huge thanks too to all the members of the public that came along and that bought ducks before the race or on the day.

Special mention to Rtn Stephen Thompson, past Chair of our Fundraising Committee, who's been organising the race for many years since it started (the first Canterbury Rotary Duck Race was held in the River Stour at Bretts, Milton Manor Farm, in 2000), and to Rtn Tony Loughran who is our current fundraising Chair, to PP Viv Pritchard who oversaw the race on DuckDay, to Rtn Deborah Connolly for overseeing the race marshalls, to Rtn Wendy Jones for organising sponsor forms, to Rtn Raj Dasan for organising duck 'selling', Rtn Robin Vickers who organised duck counting, to Rtns Simon Edridge and Brian Dobinson for organising leaflets, to PP Peter Hermitage for keeping us all entertained over the loud hailer, to our President Margaret Griffin and Rtn Gill Dixon for manning our stall and fielding questions about Rotary (and to ShelterBox, who had one of their shelters with box contents on display - these are sent out to parts of the world dealing with disasters and we often work with them), and to PP Tim Brett who was the star of the show in his fetching duck outfit. We hope we haven't missed anyone out - it was a superb team effort. We hope to post an update with the total received later.

You can see pictures over at our Facebook page and those from Canterbury Lifesaving Club at their Facebook page. We hope to have even more pictures and video soon, together with an update on the total amount raised.