Duck travels: An outing in Jersey 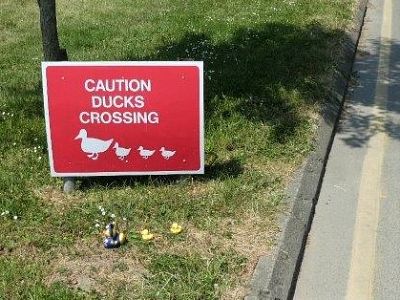 It seems to be a time for updates - this latest being an update about the four ducks that were training in Lanzarote earlier in the year (in order to take part in our Duck Race in September).

After being buffeted in the Bay of Biscay, the four duck-athletes stopped off in the French city of Bordeaux. There, we hear, one of the ducks decided enough was enough, and made a career change by joining “Le Canard” as a journalist.
Upon resuming their swim, the remaining three met Lord Nelson Duck who had been on a commemorative visit to Trafalgar.  He guided them to their next landfall, the island of Jersey, where they had a rocky climb to get out of the water but found lots of helpful signs awaiting them.
After a few days rest, mainly in the hot tub, they hope to arrive back in good time, fit and ready to go, for Rotary's Annual Duck Race in September.
Picture: A sign warns road users about the ducks! Picture credit: Bob Anderson.
For more pictures from Bob please visit our Facebook page or follow us on twitter  - @RotaryCantUK