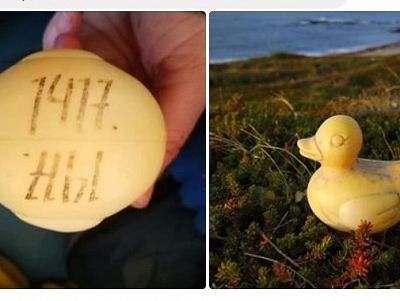 Do you remember an article from us back in September 2019 about a plastic duck that had been found in Russia? Well, we have an update...the duck's origins just MIGHT have been discovered! Read on...

So, back in September 2019, we received a message via our Facebook page from a gentleman called Vladimir in Russia. It turns out that while exploring around the shores of the Barents Sea, in north Russia, Vladimir had found a numbered plastic duck - Duck No. 1417 - and wondered if it was one of ours. He'd sent a picture of the bird too. He'd been busy trying to find its origins. Sadly, it wasn't one of ours.

Well, late last night we heard that the mystery of its origins MIGHT have been discovered and, in fact, the duck may have started out from Canada. That did make us laugh - I mean, we've heard of Canada Goose, but never Canada Duck! Anyway, Vladimir is now in the process of verifying this as he wants to be sure the duck really did start out from there.

Amazingly, if the duck did start out from there it was probably taking part in a race held in Ardmore in Alberta, Canada. According to the Duck No. 1417 facebook page, a lady texted yesterday to say:

"We put them in the Beaver river just north of Ardmore Alberta, Canada every year for a fundraiser for our school. Sometimes we lose one and I guess it goes on a trip around the world!"

Following the anouncement one commentator wrote on the Duck No. 1417 page: "This is just the best! We started this race in Ardmore 30 years ago - I guess this little guy needed an adventure! Oh the stories he could tell!"

We couldn't agree more, and sooooo wish we could hear what those stories are!

As for us - we are having our own Duck Race on Sunday the 19th September, to raise funds for the charities and causes that we support. It's a great community event too - and after the past couple of years we think the community is really in need of something fun.

We always try and collect all of our own ducks back after our duck race - so hopefully none of our ducks are going on any long trips. ('Though sometimes they do travel by more conventional means - see here, here and here).

We don't know the plans but imagine that if the origins are confirmed the duck might be flying back to Canada. Will keep you posted if we learn more!