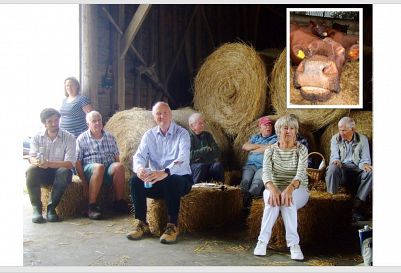 As part of an exciting programme of events for our Members organised by our President Stephen Thompson, several Rotarians and their guests got to visit a local mixed farm the other day - and say "hello" to some of the animals there!

Stephen and colleagues have come up with a packed programme of events for our Members, all broadly under the theme of "the food we eat". This time we had the opportunity to visit a working farm and learn how it operates.

Higham Farm is situated in Stodmarsh, not far from Canterbury. It's very much a family business - having been in the family for generations - and is currently run by James Holdstock. It's called a general mixed farm as it has arable land, cattle and sheep. There are also apples and pears!

Our group of around 36 (suitably attired, with several giving their Wellingtons an outing) were met at the farm by James, who kindly gave up some of his time at a busy part of year to talk to our visitors. Unlike most farms these days which are highly specialised, Higham Farm continues to be mixed, with its own admirable pedigree Sussex beef herd (the Elbridge herd, the stock having first been established after the second world war). As well as its apples and pears, this year the farm even had pumpkins as a new venture! The farm's cattle, potatoes, fruit and arable are all accredited to the Red Tractor mark that aims to ensure that food is traceable, safe to eat and has been produced responsibly. Although not organic the farm runs under a pesticide minimisation plan and is part of the environmental stewardship scheme.

Higham Farm lives up to its name and it can be a bit breezy, but nonetheless our entrepid group managed to dodge any extremes of weather and visit the cows and bulls and later enjoy a picnic of sandwiches, pies, sausages, samosas and other snacks, all while sitting on hay bales! One of the bulls, Gladiator, was delighted to meet up with a few of us.

You can learn more about the Elbridge herd here.

Picture: Our group of visitors sitting on the hay bales. (Inset: one of the herd gives us a strange look). Picture credit: Sue Thompson/Sheila Cragg/Rotary Club of Canterbury.