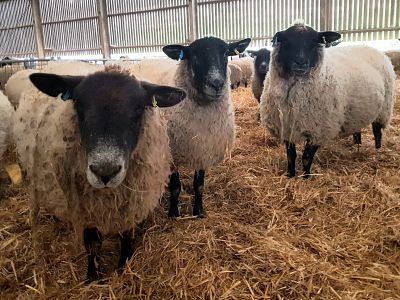 Our Members and their guests had a fascinating trip to a local farm on Tuesday when they got a chance to see lambs being born right before their eyes - no kidding!

Our President Stephen Thompson arranged a trip to Dean Farm in Stelling Minnis so that we can learn more about lambing and sheep farming - continuing the "what we eat" theme for his Presidential year. As lambing season has just started, our Members and their guests got a chance to see plenty of mums-to-be and babies; some of our group were even lucky enough to actually see some lambs being born!

The Farm is owned and looked after by Peter Francesconi, his wife, Maureen, and son, Martin. (Peter also has two daughters, Jackie and Karen, who live overseas). Martin's two children are both studying agriculture so, as Stephen said when introducing us to Peter, "The dynasty will be secure!"

Stephen then handed over to Peter, who gave us more details about the Farm and the sheep in the large building (the lambing shed) we were all standing in.

"I actually still live in same house I was born in," declared Peter, telling us that his father first came to the farm back in 1933, before he was even married. The farm now consists of approx. 350 acres; they also farm around 2500 acres. Peter reckons that 1100-or-so ewes give birth each year.

Sheep farming is not the only activity that goes on at the farm - they also grow potatoes and arable crops. In addition, a large area is dedicated to conservation (with areas left to grow wild with flowers etc.). In his "spare" time Peter also makes nesting bird boxes for his farm or for his aviary.

The lambs from Dean Farm aren't sold in the market; instead they are sold direct to the abattoirs and eventually the meat finds its way to supermarket shelves. We learned that a lot of lamb is exported each year - for example to France. Peter's lambs are sold reasonably early - when about 40kg live weight. Lamb prices vary - but are generally around £100 per lamb.

There are lots of costs for the farm. As well as costs of keeping 5 full-time staff, a shepherdess and sheep dogs, there are costs of food, equipment and electricity (especially lighting), veterinary costs, and costs of shearing the animals. Even a carcass costs money for disposal. (We learnt about the importance of electricity when one of the staff members told us that two days without electricity as a result of the recent storms had been "a nightmare", with the staff needing to work without hot water and to wear head torches to see the animals).

The lambs need to be vaccinated against a host of diseases - one of the breeds that Peter has is especially prone to foot rot, for example. Despite being sheared periodically, there's not enough wool produced to cover the costs of the shearer - even if the wool goes to the wool market.

There are three main breeds of lamb on the farm: the bulk are black-faced Suffolk cross Mules (Mules being a breed of lamb originating in the Yorkshire Dales); others are Suffolk cross Hampshires. They also have some Pure Romneys. When asked about the differences between breeds, Peter told us that different breeds grow at different rates and lamb at different times of year. They are also suitable for differing environments; some environments, for example, need hardier lambs. In response to another question about the taste of the meat, Peter told us that you can't really tell the lamb breed from the meat. However, in general, mutton has more flavour than lamb. Wryly, Peter added: "but some people don’t like flavour - they like chicken!" - a comment met with some smiles.

Peter estimated that around 595 ewes will be lambed at Dean Farm between now and mid-March. The lambing this year started on 17 February. (Peter told us he used to breed Dorset Horns at one time - they lambed into Christmas. Unfortunately for Peter, the trade for that breed no longer exists.)

Lambing takes place in two batches. As soon as the lambing is done, the building in which we were standing would be cleared, cleaned & disinfected, and filled with sheep again. We learned a great deal about the practicalities of lambing. For instance, just like humans all the ewes are scanned before birth. This allows the ewes to be divided up according to how many lambs they are due to have: one (singles), two (twins) and three (triplets). They never "turn out" a sheep with three lambs. Instead the third triplet lamb is usually given early on to a single mother to look after, just after she's given birth to her own. The process is better than rearing a lamb on the bottle. Aside from this and having their navels dipped to prevent infection, the lambs are left alone with their mothers as much as possible.

When asked how long the lambing process takes, we learned it varies a great deal - some lambs are born very quickly and take minutes, others take much longer. They keep a lookout for animals that need attention; someone will actually stay with the sheep all night during lambing.

There are also several sheepdogs that help with the Farm. Sarah, the shepherdess, also trains and sells them. "Training needs a lot of patience," says Peter, but it's so important as "you can't work sheep without them - it's very hard."

Peter answered a number of additional questions from the audience before we were given the opportunity to wander around the pens and the farm. We saw the different groups of mums. Apparently,, there were 89 singles, plus two hundred-odd pairs and triplets. First we noticed lots of very newly-born singles and twins penned up - these are the ones needing some special attention.

As we continued to tour the building some of us saw a little lamb being born. Within minutes of birth he/she was up and suckling from mum on wobbly little legs. One of our Members quipped: "Well, how long have we been here?! We've seen a lamb be born, cleaned up, and even seen it take its first steps!" Asked if he still enjoys seeing another lamb being born, Peter nodded and smiled - "I've been doing this for 60 years," he said, "but yes, I still get excited when I see them born!"

One of our guests - who, coincidentally, loves lambs (as demonstrated by the lamb-themed earrings she wore especially for the visit) - got a chance to go into a pen and assist with a delivery herself. "Oh, absolutely one of the best moments of my life!" she declared as she later described what had happened.

Finally, we got a chance to see some of the cows kept at the farm before heading home with a much better understanding of the life of a sheep farmer.

Picture: Some of the ewes in the lambing shed. Picture credit: The Rotary Club of Canterbury.