Funds raised for pandemic-affected in Bangladesh 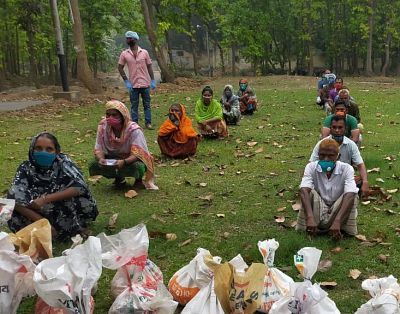 When one of our members heard of the suffering of those affected by the coronavirus pandemic and its associated lockdown in Bangladesh, she was determined to find a way to help. Given the lockdown, she had to find a new way to raise funds

Bangladesh is a low-lying country, falling in the delta of three major rivers and neighboured by India and Myanmar. According to the UN refugee agency UNHCR, Bangladesh, a developing country, is already dealing with over 742,000 Rohingya refugees that "fled violence in Myanmar at a staggering rate in 2017"; something that has put great strain on nearby rural communities.

One of our Rotarians has her roots in the country and is in regular contact with those there, including the Rotary Club of Dhaka. She heard through them of the terrible increase in poverty due to the coronavirus lockdown; many, many people who earn a meagre hand-to-mouth living as labourers, domestics, rickshaw-pullers, market sellers and street hawkers suddenly found they had no income. Often, these people support poor family in rural villages so, in turn, those family members were hit hard. On top of this, garment factories were suffering from cancelled orders from overseas countries such as the UK and USA, and many garment workers lost their jobs - meaning rural families often lost multiple sources of income at the same time.

The Dhaka Rotarians knew that this would have terrible impacts on the poor and vulnerable. They told our Member that they were using networks with which they'd previously worked to distribute essential food supplies to families identified as needing urgent assistance. Each family was receiving 10 kg of rice (the staple food), 5 kg of potatoes, 1 kg of lentils and 1 litre of oil - a supply estimated to last two weeks for a family of 4-5. Each "pack" cost 800 taka (roughly £8). The primary areas being targeted were those that were hard to access and that had not received Government aid.

Our Member asked herself what she could do "under lockdown" to raise funds towards the work that the Dhaka Club was doing. She didn't want to just ask her friends and family to support yet another cause. She wondered if she had the ability to make something that she could sell during lockdown - something perhaps that people might appreciate at that particular time. She hit on the idea of selling hand-painted motivational quotes or personal messages. These could be posted out as the lockdown eased. Luckily, this turned out to be popular - but interestingly, while orders came in, far more of her friends and family were choosing to give donations.

Meanwhile, a storm was quite literally brewing. Cyclone Amphan - expected to be a "super cyclone" - was expected to make landfall in Bangladesh and nearby India. This would have even more impact on some of Bangladesh's poor. So our Member approached our International Committee's Chair and our President to see if she could ask Members & their families for support. (Our International Committee had previously supported projects carried out by the Rotary Club of Dhaka - a sleeping kit distribution and the distribution of hygiene kits.)

So, with the Chair and President's go ahead, she launched the fundraiser among Club members. She found the idea accepted with lots of enthusiasm and soon enough she got her first order. But, to her surprise, she found a steady stream of donations also being made by Members to support the cause.

In the meantime, Cyclone Amphan hit the country - with devastating effects, especially on those whose homes were rudimentary or on those who relied on fishing. Many boats had been smashed to pieces by the fierce cyclone. Our Member heard that local Rotarians and their networks had reported a disturbing increase in the number of beggars, to levels in some places not seen since the Bangladeshi War of Liberation in 1971. The Rotary Club of Dhaka decided to also help some of those affected, not merely with food, but with aid that they could spend on whatever they needed most urgently - often shelter.

Our Club treasurer has since totted up the donations. Added to the earlier sales and donations, the total figure has well bypassed the £200 originally target set by our Member - proof of a real spirit of generosity despite these difficult times!

With Gift Aid claimed on some of the donations, the total is now over £3,500. This money has just been sent off to the Dhaka Club, which is already making plans for food/fund distribution. We hope to hear more about these plans from one of the Dhaka Club's Past Presidents at our Zoom meeting next week.

Our Member would like to thank all those who have supported her fundraiser, particularly Rotarians, friends and family that gave very generous donations. She looks forward to reporting on how the money was spent at a future meeting.