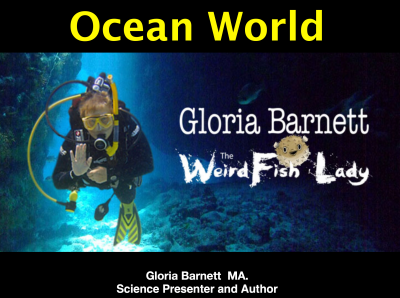 Gloria (the WeirdFish Lady) is an author, international speaker and advocate of the ocean. On 9 June Gloria Barnett joined our Zoom meeting to talk about the Ocean World.

During Gloria's talk we were treated to some incredible original underwater film clips and amazing facts:
Did you know? that just one ocean - the Pacific - takes up 32% of the Earth's surface? That's more surface area than all of the land put together.
Did you know? It's estimated there are between 2 and 10 million species living in the ocean which have yet to be discovered?
Did you know? The tongue of a Blue Whale is the size of an elephant?

The facts came thick and fast and were presented with humour too. Yet Gloria, who is a Rotarian with the Rotary Club of Canterbury Sunrise, also had a serious message and spoke about the importance of keeping the oceans healthy.

She spoke of the problems with supertrawlers decimating ocean life and the possibility that we are the last generation to eat fish. We learnt about the importance of plankton (diatoms) - microscopic algae which live in the oceans. These tiny organisms are champions of photosynthesis and are responsible for producing 70% of the oxygen for our planet. Sea grass is responsible for 10% whilst rainforests and other land plants only produce 20% of our planet's oxygen.

Gloria then linked the use of fossil fuels to the ocean story and explained the dangers of too much carbon dioxide in the atmosphere, which gets absorbed by oceans. 'There is a serious threat to the planet's oxygen production due to the acidity changes in the ocean caused by excess carbon dioxide.' This was a very scary thought!

We were reminded of the new focus of Rotary on Environment and Gloria explained how her work as a children's author linked education with environment. We were told of other Rotary Clubs initiatives to help educate young people about the importance of keeping the oceans healthy.

Gloria spoke about her new series of books 'The Lucy Morgan Adventure Stories', which have an environmental twist contained in the adventurous storylines. (All about saving the oceans and the creatures that live there, of course.) These books are being adopted around the UK for Rotary projects with youngsters aged 8-12, and Gloria would love the Rotary Clubs she visits to develop a project which can help primary schools to have these books as resources in their schools. There is a Teacher's Resource Box available too, which some Rotary Clubs have gifted to schools.

Gloria’s talk made a great impact on members and visitors who joined us for the talk.

Find more information about Rotary projects, her books, and lots of amazing photos and videos, on Gloria’s web site.

With many thanks to Gloria for her help with this article.