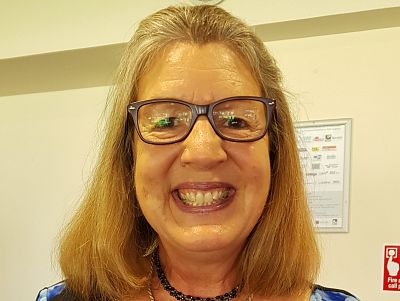 Readers will know that about the close links between Rotary/the End Polio campaign. Yesterday our members were fortunate to hear a personal perspective from Hilary Brian about her trip to India, during which she assisted with a national immunizatiion day.

Hilary is Assistant Governor for our District (1120) (Rotary South East) and a member of the Rotary Club of Chestfield. Earlier this year Hilary went out to visit India and Nepal - and during her time in India was able to play an active role helping local Rotarians ensure that youngsters received the polio vaccine. As well as the immunization campaign, Hilary told us other things about her travels across India and other encounters with Rotarians.

First stop on Hilary’s tour was Amritsar in the north west of India – which is famous for its Golden Temple. Through contact with a lively, local club she and others visited a blind school that educates youngsters from 4-16 years age, ensuring they have a job at the end of their schooling. The school is sponsored by a Rotary club in Scotland. There, Hilary met one former student who now has a job in TV and comes back to inspire other youngsters. “It was very encouraging to see how the money was being spent and to meet alumni,” said Hilary.

Hilary also attended a mass wedding. Culturally, marriage is very important in the region, but many poorer families struggle to host a ceremony. Some local Rotary clubs sponsor such weddings to address this issue – each couple has a set number of guests and gets married on the same day. Families are often shy, poor and ill-educated, with many young couples not having met before the wedding.

Hilary also visited a school which, in the early part of the day is a private school but which, in the later day, serves to educate (and feed) underprivileged youngsters. Hilary was impressed with the students’ manner, cleanliness, and keenness to be educated – “They never play truant,” she said.

Hilary found the Golden Temple fascinating. She told us how it houses a Sikh holy book that is cooled by pankawallahs and “put to bed” every night. She also saw the famous kitchen where large teams of volunteers feed 100,000 people (visitors as well as the poor) every day! She showed pictures of ladies making hundreds of chapattis in groups sat around low tables.

Hilary also saw the Wagah border ceremony which is held at 4pm every day at the India/Pakistan border. Here guards put on a show watched by 10,000 people – followed by singing and dancing to Slumdog Millionaire hit ‘Jai ho’.

The next stop on Hilary’s tour was Delhi. There she met up with people from all over the world who had come for the polio project. Polio, which affects the nervous system and can lead to paralysis, is spread by poliovirus. It usually spreads via contaminated water, so is a particular threat to parts of the world with poor water and sanitation. The current vaccine is safe and effective – and is used by Rotary and its partners to immunize over 2.5 billion children worldwide.

Hilary heard speakers from the World Health Organization (WHO) who gave an update on polio in India. She also told us about the ‘Rotary effect’ – the noticeable effect that Rotary’s immunization campaign has had on polio numbers. The polio vaccine is now part of a ‘rainbow’ vaccination programme alongside vaccines for diphtheria and whooping cough. India has carried out two national polio campaigns this year, so many children have been immunized and the risk of getting the disease is now low.

However, Hilary told us about the case of Rukhsar – a young child found to have polio. On discovering the case a mass immunization campaign was immediately carried out in order to contain the disease - this process has now become the gold standard following an outbreak and there is now an emergency preparedness plan in place.

Hilary next moved on to Kolkata (formerly Calcutta) where she saw both sides of Kolkata – wealthy and poor – and where she assisted immunizations. Youngsters were brought by their families to ‘immunization booths’ (like market stalls) where on vaccination each child had their nail painted purple and received a small gift.

The next day included a visit to Kolkata’s slums. There Hilary saw how one toilet and one shower served 40 families; both were rudimentary but clean. Hilary’s job was to look out for children without the painted nail; it wasn’t hard to encourage youngsters to get vaccinated because of the toy they all received. At one point Hilary spotted large groups of people literally living on the railway line. There, she found around 150 youngsters to vaccinate; many were Muslims and their families were under the misapprehension that the vaccine contained porcine (pig) products. They were told this wasn’t the case by the healthcare workers, who also somehow logged where these youngsters lived.

Next on Hilary’s itinerary was a trip to Mother Theresa’s humble convent – where she was surprised to see many of Mother Theresa’s personal items on display. She also visited a leper hospital; leprosy, carried by a mycobacterium, affects poor, malnourished people – and often, if not treated, leaves them deformed. There is still a lot of stigma associated about the disease, and Hilary heard how some were kicked and pushed.

As Hilary drew her talk to a close she spoke of visits to brick kilns, the Sunderbans, Nepal, Hampi, Madurai and Kerala. All in all it seems Hilary had a worthy and important trip, encountering cultural and other differences along the way that she found so interesting.