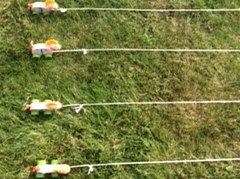 We've heard, straight from the horse's mouth, that our Charity Horse Race the other night was great fun and that everyone had a lovely time. We also managed to raise around £500 for the wonderful local & international causes that we support.

It wasn't quite Royal Ascot, but nevertheless the second-floor room at the Colin Cowdrey Conference Centre at the Cricket Club proved to be a splendid venue for our little fundraising event.

The get-together was well attended by our Members, members of other local Rotary Clubs (including Sunrise & Forest of Blean) and their guests. Many were dressed for Ascot, most wore hats - although there was a jockey in attendance in his racing silks.

The event was overseen by our President Stephen Thompson, with Past President Sydney Denham acting as the chief steward & compère, and Past President Richard Kemball-Cook running the sweepstake. Richard did a stellar job as bookie, complete with tote chart, while Past President Alastair Scott took in the money.

There were six races in all - two gents' races, two ladies' races, a mixed race and finally a race for the winners of the other races. Everyone taking part in each race was allocated a horse - neigh, not a real one, but a wooden pull-along one.

With several horses lined up side-by-side along the race course, each person had to sit on a chair with their back to the track and reach their hands behind their back in order to reel in their horse using a chord/pole on the word "go" from Sydney.

There was plenty of cheering from the enthusiastic race goers. One Rotarian looked very much the part, dressed up in white & black with a lovely hat à la Audrey Hepburn in My Fair Lady; fortunately, she didn't use the quite the same words as Eliza Doolittle to cheer on her horse (which, incidentally, was NOT called Dover)!

After the exhausting racing everyone took a break for a tasty fish & chip supper and further chit chat. There was also a raffle run by President Elect Tony Loughran, in which the winner - Rotarian Gill Dixon - took home half of the raffle takings. "I nearly feel off my chair!" said Gill. Apparently quite a few friends have suggested she buy them a drink but she has already tucked her winnings safely away in the bank.

Stephen thanked everyone that came along to the event before the evening’s jollities came to an end.

Gill told us that the evening was lots of fun and that there was plenty of chatting, laughter and mingling among the members of the different clubs and their guests. Sydney, we're told, did a "grand job" as compère. Gill praised all the hard work that had gone on behind the scenes to make the event run so well.

The funds raised from the evening (around £500) will go towards local & international causes that our Club supports.

Picture: The "nags" having a practice line up the day before the main event; Picture credit: Sidney Denham/Rotary Club of Canterbury.

Many thanks to Gill Dixon for her assistance with this article.