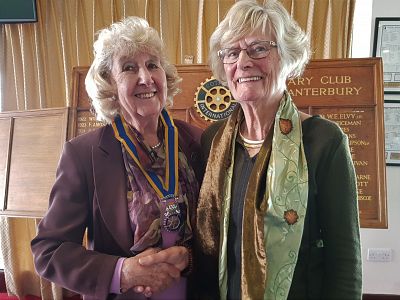 We’re delighted that 2019 has started so well for our club and are pleased to announce another new member – Jenny Brown.

Jenny was inducted into our Club during our meeting yesterday, after being introduced to the members that were present by her sponsor Mary McGeary. She was welcomed to the club by President Margaret Griffin and becomes our second new member of the year.

Although Jenny was born in Northern Ireland, she has been in Kent for over 20 years. She currently lives in between Canterbury and Folkestone.

Jenny is a linguist, and although now retired she has worked previously as a university lecturer (in English for academic purposes) and as a therapeutic counsellor. She also worked for some years at the Travel Track of the British Travel Authority.

Language and words are very much a part of Jenny’s life – she is part of an advanced German conversation group and participates in two creative writing groups. As well as German, Jenny can speak French and a smattering of other languages. Other interests include literary criticism, travel, cinema, art, theatre, reading, walking and Tai Chi.

Accepting her Rotary badge from Margaret yesterday, Jenny said: “I’m very pleased to be joining you…I find your aims are extremely worthwhile and look forward to knowing you better”. We also look forward to getting to know Jenny better and to working with her in our various activities. We’re sure her many skills and experiences will add great value to the club.