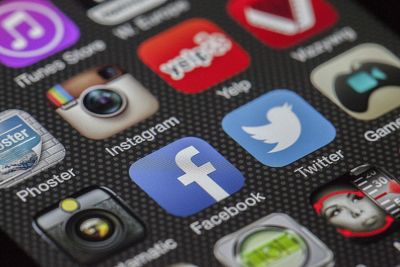 Avatars, clickbait and geotags - these were all terms that were explained to us during a talk in which one of our Members gave a brief overview of social media.

Social media has really taken off over recent years, and with Covid-19 more and more of our social interactions are being conducted over the internet. However, for many of our Members social media is still something relatively new, and new platforms and terminology have come about so fast it has perhaps left some of us feeling as if we are always catching up. As such, it was good to be given an introduction to social media by Rotarian Julie Reza who, with some of our other members, oversees our social media accounts and posts news items on our website.
Claiming to be "no expert" in this area, Julie jokingly subtitled her talk "the blind leading the blind" - despite the fact that she's worked with social media as part of her work in global science communication for many years.
Julie started her talk with a definition of social media - “Websites and applications (apps)/programmes that enable users to create and share content or to participate in social networking.” She highlighted how the use of social media has picked up since the turn of this century, rapidly expanding in recent years, with Facebook being the most widely-used platform. She reckoned that figures on the use of social media might have changed considerably since Covid-19, when real-life networking and connecting has become limited.
We learned that there are many different social media types; these use different formats, have different user groups, different purposes and different advantages and disadvantages. We heard about the main way in which the most well-known social media platforms are used - e.g. Facebook (social networking), LinkedIn (professional networking), YouTube (video sharing), Twitter (microblogging) and Flikr (photo sharing). A number of cartoons and visuals reinforced this information.
Julie then focused on three main social media platforms to allow Members that do not use them to become familiar with how each looks and is used - Facebook, Twitter and Instagram. She gave us basic statistics about each platform, using screen grabs of each platform's founders' profiles to illustrate her points. For those of us new to the field there were lots of new terms to learn that those who regularly use the platforms take for granted. Posts, cover pictures, profile pictures, timelines, privacy settings, pinning, tweeting, retweeting, trending, curating and "DM-ing" were all illustrated or explained.
Julie then went on to outline how our Club uses social media. focusing this time on the three platforms that we use - our website, Facebook account and Twitter account. But first she briefly reminded us of how we used to communicate with others (the public, other Clubs, etc.) before the advent of social media; she also touched on the limitations of each method. For instance, we may have used private communications such as "word-of-mouth" to tell friends, family, colleagues and people we work with about our work - but this method of communication is limited to people similar to us. On the other hand, we may have used the mass media/public broadcasting to "spread the word" - but television and radio were rarely used - perhaps because of their cost.
We learned how social media helps us broaden our audience. This has several benefits: (1) it increases awareness about us and builds trust within the community where we work, (2) it increases the number of people who support us (e.g. donors, sponsors) and, potentially, may lead to people having an interest in becoming a Member, (3) it helps us increase awareness of specific activities - such as our duck race - so that we get increased attendance or participation, (4) it helps increase awareness about us among those who need our help or support, (5) it helps us know what OTHERS are doing. Most importantly, it helps us CONNECT with others, not just locally, but nationally and even internationally.
Again, using screen grabs, Julie helped us get familiar with certain aspects of our social media accounts. She told us about followers, analytics, tagging and mentions, and outlined some social media etiquette.
In the last few slides of her Zoom presentation, Julie helped us understand a number of "new" terms that are fast becoming common parlance. An avatar, for instance, is a visual representation of a person. We learned about the risks of bots and clickbait, and learned how to make our posts more interesting by using pictures, emojis and GIFs (as relevant!) We learned how tagging using handles and creating hashtags can help increase the audience that see our posts, and we learned about special hashtags such as #MondayMotivation and #FollowFriday. For each, Julie gave an example of a post that might use it.
In another slide Julie gave some of her own tips for social media. For instance, she advised using a number of platforms as different platforms will have different (though overlapping) audiences. She told us about good times of day to tweet, and told us how we can use social media management apps such as Hootsuite to set up messages to go out automatically from our accounts (not something we do at present). And a final piece of advice was to post/tweet responsibly, consider Rotary's 4-way test (Is it the TRUTH? Is it FAIR to all concerned? Will it build GOODWILL and BETTER FRIENDSHIPS?) and "think before we tweet"!

Julie ended with some fun cartoons that touched on some of the points she raised during her presentation before she opened the floor to quite a number of questions from our audience. At least one Member afterwards stated "you have me converted!"
Our Facebook page: https://www.facebook.com/rotarycanterbury