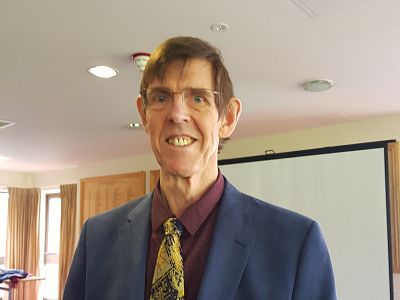 Recently our Members got to hear from Jeremy Martin on the topic of diet and public health…although having heard the talk some might have wished they’d chosen different options for their meal!

Jeremy is an ‘ambassador’ with the Public Health Collaboration, a charity that says it is “committed to improving public health through good eating choices”.

Jeremy first gave a bit of background about himself. Currently retired, he is a civil engineer and has worked in countries such as Bangladesh during his career. He was born, and later went to school, in Zimbabwe (his parents had been posted to the Belgian Congo). He and his wife left the country 40 years ago - when their son was just 2 weeks old.

Jeremy started his talk on a cricket theme (appropriate, given the meeting location at the Cricket Ground), speaking about Dr Peter Brukner, the team doctor for the Australian cricket team and his ‘Sugar by Half’ campaign.

Jeremy then went on to talk about his personal ‘journey’ relating to health and diet. He had suffered from several health issues and, suspecting they may be diet related, explored various things, including going gluten-free - but with only limited success. He then came across Professor Tim Noakes on the internet – this changed his life. Jeremy immediately made radical changes in his diet, notably reducing carbohydrates (including foods with flour) and processed foods. His diet is now very different, and he prepares all his own meals – “Carbs went from 50% of total calorie intake to less than 10%.” As well as losing weight his health issues largely disappeared following the dietary change.

After continuing his research on the internet, Jeremy now feels he can use his experience and learning to perhaps inform others. His viewpoint is that rather than reducing, obesity is actually increasing despite dietary advice. He spoke of an overeating experiment by about Sam Feltham which suggested that “All calories do not seem to be the same.” Sam is the now the Director of the Public Health Collaboration.

Jeremy went on to talk of high-profile individuals for whom a low carb diet has helped weight loss and other health issues, such as Tom Watson, deputy leader of the Labour Party. He also spoke of the work of David Unwin, Founder member of The Public Health Collaboration, who won an NHS Innovator Of The Year Award for his research into lifestyle / type 2 diabetes. Finally, Jeremy ended his talk with the following quote: “Your diet should be one that you can live on and live with forever”.