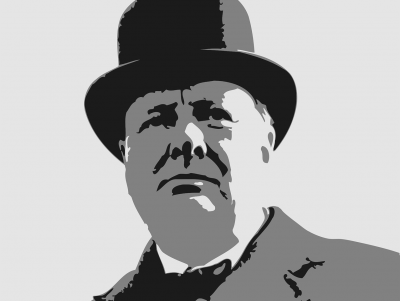 Back in September, Jim Gascoyne, a member of the Coleshill Auxiliary Research Team (CART), spoke to our members by Zoom about Churchill's Secret Army - the GHQ Auxiliary Units - an army that, unsurprisingly given its name, not many of us knew about!

One of our newest Members, Crispin Rampling, has an interest in history and the military and was keen to write up the talk, adding in a little of his own research as well, which we reproduce here:

In his talk, Jim, who has a special interest in the secret organisation owing to the local involvement of his father as an Auxilier and his mother as an ATS (Special Duties Branch secret wireless operator) introduced us to Churchill's Secret Army, telling us about its mission, composition and history, interspersed with interesting facts, anecdotes and some historical visuals. This inspired me to do a little extra research:

Our tale begins at the first major meeting of the Allied and German Armies in Western Europe...

On the 10th May 1940, Hitler invaded France and the low countries, commencing what came to be known as 'The Battle of France'. The German invasion utilised a tactical gamble and a pioneering new form of warfare, called 'Blitzkrieg', to avoid the stationary war of 1914-1918 and rout the Allies.

Mechanised troops advancing fast and far ahead of the line were supported by targeted aerial artillery in the form of the Luftwaffe. As a result, the bulk of the Allied force was pushed back to the port of Dunkirk where it faced two choices: annihilation or evacuation.

From the 26th May to the 4th June 1940, the Royal Navy successfully embarked 558,000 British, French and Belgian soldiers from France to the UK to fight another day. However, the bulk of the British army's heavy equipment (tanks, artillery and motor transport) remained in France for the Germans to utilise.

With the French as good as defeated and the British in total disarray, the German focus would soon switch to the British mainland and an invasion would surely be attempted. While the British Army licked its wounds and re-equipped for the coming struggle, it became evident to Churchill that the Army would require augmenting with irregular troops who would, in case of invasion of the UK, perform special tasks behind German lines: his 'secret' army.

On the 2nd July 1940, the Cabinet agreed to the formation of these irregular troops: The Auxiliaries were born.

The first unit was assembled near Ashford in Kent. Army officer Peter Fleming (brother of the Bond novelist Ian Fleming) was tasked with creating the training mould for future Auxiliary units. Peter Fleming brought in another brother, Richard, who was a member of the Lovat Scouts (a forerunner of the soon-to-be famous commando regiments). Richard Fleming brought with him instructors skilled in irregular warfare who would be able to instruct the first Auxiliary Patrols.

The instructors (like the Auxiliaries) were mainly men of the land, e.g. game keepers and farmers. Illustrating this point, the roll call for the Wickhambreux unit included: two farmers; three fruit farmers; one dairy farmer and one hotelier. In training, the Auxiliaries would learn such things as weapons handling, concealment, manufacturing and using explosives, and living off the land. The Auxiliaries were provided with the best arms available and were prioritised over many other regular and irregular units.

Once trained and in the field, life for the six to eight members of each patrol revolved around the unit's 'OB' (operational base). Usually constructed by the Royal Engineers, these underground bases comprised a concrete base, a limited amount of brickwork and corrugated iron roofing. Within, they held bunks, a small stove/kitchenette, a toilet and room for limited stores. The OBs were often in well-concealed areas such as woodlands, making them near impossible to locate. So much so that to this day, some OBs are yet to be located. Entry and exit to the OB would be through camouflaged entrances.

It's important to re-emphasise the Auxiliaries' level of secrecy; each man who joined was required to sign the Official Secrets Act of the time and members were forbidden to impart even the most trivial detail to outsiders. Each unit would have a small number of essential tasks to perform. In Herne Bay, for example, while the official tasks still remain unknown, it would be reasonable to conjecture that demolition of the train line from the coast to London would be a high priority. Outside of their essential tasks, units would locate opportune German targets or even eliminate Britons with an overly friendly disposition to the enemy.

An Auxiliary patrol's operational area was only a few miles, yet they would know nothing of their neighbouring units and that unit's operational goals. This was so that, if captured, they couldn't impart any details of the wider operational picture to the invaders. It's notable, however, that the preferred strategy was for Auxiliaries to prevent themselves from being captured in the first place. It was thought that, post-invasion, an Auxiliary's life expectancy would only be around twelve days!

At their height, the Auxiliaries totalled 638 patrols across the country. It wasn't until November 1944, when the threat of invasion had totally subsided and the tide of the war had changed completely, that they were disbanded.

Jim is also a retired Rotarian and a founder member of The Rotary Club of Canterbury Sunrise.