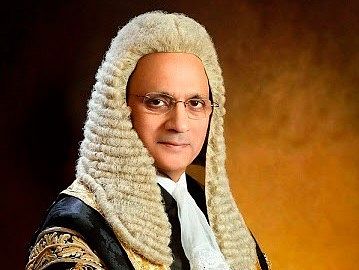 It's not often that you get a speaker at a Rotary meeting who was once proposed to be caretaker Prime Minister, so our Members and guests were very privileged to get that chance the other day when Hon'ble Justice Jillani of Pakistan gave a talk.

According to the World Justice Project (WJP) (1), "Justice Tassaduq Hussain Jillani is known as a liberal, independent and balanced Judge. As a Judge of the High Court and Supreme Courts, he delivered opinions and authored judgments on various issues of domestic and international concern".

Justice Jillani is a former Chief Justice of Pakistan - the country where he was born, educated and currently lives. WJP also adds "In 1979 he was appointed as Assistant Advocate General Punjab and thereafter he became Additional Advocate General and finally the Advocate General Punjab in 1993. In 1994, he was elevated as Judge of the Lahore High Court, Lahore and having served there for ten years (from August 7, 1994 to July 2004), he was elevated to the Supreme Court of Pakistan (in July 2004). In December 2013, Justice Jillani was sworn in as the new Chief Justice of Pakistan following the retirement of his predecessor." In 2018 the current Pakistani ruling party, Pakistan Tehreek-e-Insaf, suggested Justice Jillani as a caretaker Prime Minister for Pakistan (2). He was awarded the International Justice Excellence Award by the Institute of Justice Excellence, The Hague in 2019. He was also a former Judge ad hoc at the International Court of Justice, The Hague and he was awarded the 2020 J. Clifford Wallace Award by the J. Reuben Clark Law Society in recognition of his extraordinary career as a judge and a jurist (3).

Justice Jillani was introduced to us by Rotarian Dr Farrukh Hussain who has known him as a friend for many years. "Whenever I visit Lahore, I visit him," said Farrukh, adding "and he always has a genuine smile".

Justice Jillani's talk touched on many aspects relevant to democracy and the judiciary, his opening statement being: "One of the most important elements of democracy is judicial independence. Only through this, each organ of the government remains within its lawful authority, people are protected from the overreach of the executive and a free and democratic society is preserved".

We learned that although the term "Judicial independence" has been defined in many ways, the broad consensus includes the notion that "every judge is free to decide matters before him in accordance with his assessment of the facts and his understanding of the law, without any improper influences, inducements, or pressures, direct or indirect, from any quarter or for any reasons".

As a historical example of how Judicial Independence has sometimes come under threat, Justice Jillani told us about the courts established in Nazi Germany by Adolf Hitler to conduct treason trials. Hitler had told the senior judges, “I expect the German legal profession to understand that the nation is not here for them rather they are here for the nation…from now on, I shall intervene in these cases and remove from office those judges who evidently do not understand the demand of the hour”.

Justice Jillani spoke about how even long-standing democracies had, more recently, been "shaken by the populist political forces that reject principles like the separation of powers and target minorities for discriminatory treatment."

During his talk Justice Jillani focussed on post-partition Pakistan and India and mentioned how recent developments in both these countries "graphically explain how democracy suffers if the judiciary fails to remain independent or is not to its mandate under their respective constitutions." He gave some specific examples such as the controversial Citizenship Amendment Bill in India. "These developments imperil the inspiring idea of India as the world's largest democracy," he said.

In Pakistan, political challenges to the judiciary have mostly arisen through "martial laws and army rules". Justice Jillani talked of Pakistan's martial law in 1958-1962 and the further constitutional and political crises in 1969 that led to the imposition of Pakistan's second period of martial law. Eventually, we learned, "Parliament passed the 1973 constitution and the martial law met its fate by the judgment of the court."

Citing other examples of when the judiciary and those in political power were at odds with one another, Justice Jillani spoke of events around 2007 in which he, himself, was involved - when there was conflict between General Musharraf, the then Chief of Army Staff, and the judiciary. "Out of the 18 Judges of the Supreme Court, 13 did not take oath in the Supreme Court including myself," he said, adding "All these Judges including the Chief Justice were notified to have ceased to be Judges and they were put under house restraint." This was followed by a country-wide protest by lawyers and civil society, demanding restoration of the judiciary. "After the general elections in February 2008, the Constitution was restored and an elected Government came into power. General Musharraf resigned, and there was a growing demand for restoration of the Judges who had been removed from the Constitutional Courts."

Justice Jillani also spoke of how religion in the public sphere has often led to societal conflict. "Religious extremism generates pressure on political institutions and an atmosphere of fear," he stated, adding "In such a socio-political milieu, Courts have to play a more proactive role in the enforcement of Human Rights and the Rule of Law."

On a positive note, Justice Jillani stated that "the challenges faced by the judiciary in Pakistan during the last few years have recharged it and it has emerged as an active pillar of the State." He added that "The Court has passed through testing times but those have culminated in institutional vindication. The assertion of judicial independence, the rise of a vibrant Bar, a vigilant civil society, and the emergence of an independent media would go a long way in strengthening democracy, political institutions, and in ensuring an expanded enforcement of the Rule of Law."

Justice Jillani ended his talk with the rather profound quote: “Liberty lies in the hearts of men and women; when it dies no constitution, no law, and no court can save it.”

We were truly honoured that Justice Jillani was able to talk to us at short notice and were also pleased to have so many invited guests, included guests joining our Zoom meeting from Pakistan. Rotarian Dee Mepstead led the vote of thanks and the audience gave an appreciative round of applause.