Support for the Lady Mayoress' Charity 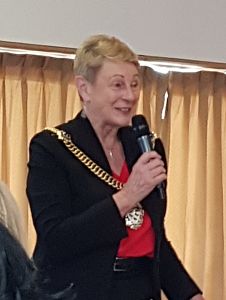 A number of local Rotarians and Inner Wheel members helped support the Lady Mayoress' Charity by attending a Charity Luncheon held at the County Cricket Club on the 20th September. The funds raised will help two charities - Pilgrims Hospice and Porchlight. The Hospice administers care to inpatients and also to outpatients and patients in their own home. With regards to Porchlight, the Lady Mayoress' Charity is supporting a programme dealing with troubled young persons by helping them to develop team building and social skills. The raffle alone raised over £400. The speaker at the event was Velia Coffey, Deputy Chief Executive of Canterbury City Council. The current Lord Mayor, Rosemarie Doyle, is a Rotarian and the Lady Mayoress is a member of Inner Wheel.

Picture: Lord Mayor and Rotarian Rosemary Doyle at the event.