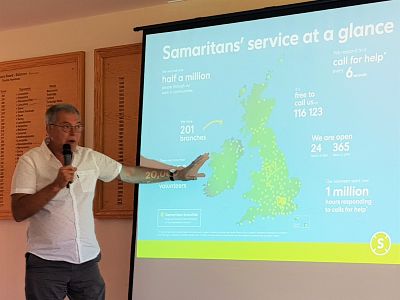 Samaritans is a registered charity that has been in existence since 1953. It's vision is simple: that fewer people die of suicide. But how do they work towards this vision? Most of us are aware of their work to some extent - but Peter helped us to get a greater understanding of what they do and how they do it.

First, Peter gave us some more hard-hitting stats & facts: In the UK and Republic of Ireland, over 6,000 people took their own life in 2017. Around 3/4 of all deaths by suicide are men. We learned that until recently the suicide death toll had been declining but, lately, the published figures showed a rise.

Peter went on to tell us more about the charity: Samaritans responds to a call every 6 seconds, they have reached over half a million people through their work in communities, and their volunteers have spent over 1 million hours responding to calls for help.

The network is open 24 hours of the day, 365 days of the year (though not all branches are open for these times), calling the Samaritans is FREE, and the number is 116 123. Countrywide, they have 201 branches staffed by around 20,000 volunteers. It is not a religious organisation, and it is non-judgemental.

There are various ways that people contact Samaritans - the most common and familiar being by phone. But people can also use email, text and letters; some also go to visit them in the local branch. Ways of communication are changing and, in light of this, the Samaritans will soon be launching a new initiative centred on instant messaging.

Samaritans also reaches out to people in their own communities (e.g. in universities, in prisons) and often works in partnership with other relevant organisations. For instance, they have just launched a partnership with Whitstable and Herne Bay Football League and are training them to be able to spot problems. Their central office aims to influence national policy makers.

Peter told us about the history of the Samaritans - the charity was founded by a vicar called Dr Chad Varah in London. Dr Varah had been motivated after learning that a teenage girl had committed suicide after starting her first period, mistakenly thinking she had contracted an STD. The incident moved Dr Varah into setting up the charity - initially, simply "a man willing to listen, with a base and an everyday phone".

The organisation has since grown to its current size. Samaritans' volunteers are ordinary people with a variety of jobs, backgrounds and life experiences. They do, however, all have one thing in common: a desire to listen. And that is the focus of what they do - listen, rather than provide counselling or give advice.

Before going on to tell us more about volunteering, Peter outlined Samaritans' values, giving us some added information about each of these:

Volunteers all undergo training - currently a 10 week course in which 15 or more trainees are trained by a team of 4 trainees and several "skills practice" volunteers. Once trained, each trainee is assigned to a mentor for a minimum of 32 hours. Each probationer will have to complete a course of four in-service training modules before having a final interview with the director.

The Canterbury branch of the Samaritans is based at 32 Northgate (next to the Penny Theatre); it is well established - in fact, it will be celebrating its 50th anniversary next year. Currently, the branch has 83 listening volunteers. These volunteers give their time freely (in Canterbury there are no paid employees). Each volunteer agrees to do 16 hours per month (or more), including at least one late night and one dawn shift per month.

Volunteers never work in isolation - there are always at least two people in the duty room. Whilst a volunteers’s role is primarily to give emotional support, they will signpost callers requiring practical advice to organisations able to offer immediate help.  At all times, though, listeners stay with their callers and hear them out fully.

Peter ended his talk with a brief Q&A session before being thanked on behalf of members by President Neil Fraser. One of Neil's Presidential charities for this year is Canterbury Samaritans, so we look forward to supporting them in coming months with donations from our special fundraising events.

If you wish to find out more about Samaritans, volunteer or donate, you can visit their website.