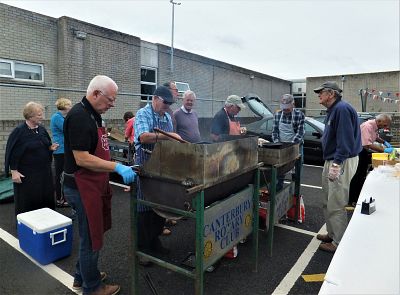 Despite the overcast skies our cheery Rotarians helped filled hungry tummies with plenty of goodies. The Rotary BBQ donated £460 profit on the day and secured an additional donation of £100 from a generous local businessman.

On behalf of The League of Friends Past President of our Club, Viv Pritchard, (who is Past Chairman of the League of Friends, and now Trustee and Honorary Secretary) thanked members of the public that went to the fair. He also thanked our members, saying "It was a great team effort, but special thanks to team captain Alastair Scott who did an enormous amount of work in buying the food, preparing the bbq and clearing up afterwards. He took on many of the tasks undertaken previously, for many years, by Roddy Tyndale-Biscoe, who sadly passed away just a month before the fair."