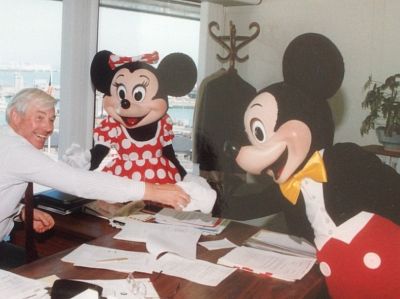 It was interesting to hear one of our Members, Leslie Stephenson, talk about his past career when giving us a talk recently entitled "Transport of Delight?"

Leslie is a naval architect and chartered engineer and during the talk he described how, during his career in designing and operating passenger ships, he discovered many problems encountered by disabled passengers on board ships. It was fascinating to hear how things have changed over the years.

Leslie started his talk with a brief synopsis of his career; we learned that he had worked at a Tyneside Shipyard, done National Service in the RAF, and even worked on a Frigate!  When working in Newcastle and later in the HQ of the UK Marine Safety Authority, he had worked on everything from life-rafts to 100,000 ton tankers, but spent most of his time working  on ferries.  In the 1970s he became a Naval Architect for European Ferries, before transferring to Felixstowe where he was responsible for ships operating in the North and Irish Seas.

After reading letters of complaint from passengers, Leslie initiated and was involved in the introduction of a Code of Practice for the Carriage of Disabled Passengers on British ships. This set the standard for all British passenger ships, including ferries.

Leslie interspersed his talk with anecdotes and examples. For instance, he told us about disabled toilets on ships. Thanks to a gentleman called Selwyn Goldsmith (an architect who had become disabled as a result of polio), many changes were introduced to make life easier for disabled people. For instance, the first dropped pavements in the world were introduced thanks to him in 1967. He went on to work on many other things, including disabled toilets. These had low basins, taps and switches. The door had no sill and was wide enough for a wheelchair. However, when Leslie was working, these toilets in ships tended to be male or female only. Yet, of course, most pushers were of the opposite sex. Leslie therefore advocated unisex toilets on ships.

Leslie's company had already introduced free travel for carers, and induction loops for those with hearing problems. Leslie introduced staff awareness training, seeing this as essential when dealing with disabled passengers. "You can't help if you don't understand the problem," he said.

Later, he was appointed to a new committee set up by the Secretary of State for Transport to advise on how disabled people could travel in the same way as those without disabilities. Leslie gave a brief review of the work carried out by the committee. They achieved many good things - although progress was often slow. One big issue was that of travelling on buses - which is why Leslie referred to the Flanders and Swann song about travelling on the buses: "Transport of Delight". Pressure was put on taxi firms and in London, all "black cabs" became wheelchair accessible.

Another challenge was the granting of disability badges. It was only in 2000 that the Blue Badges that we are now all familiar with were brought in.

Leslie left the committee in 1992, but retained a keen interest in disability. He went on to explain how, when he was a Senior Director of P&O Ferries and, after retirement, as a Director of Dover Harbour, he was able to continue to monitor and influence policies and implementation in this area.

Picture: Leslie, with some suprise visitors in his office! Picture credit: Leslie Stephenson.

With thanks to Leslie for help writing this article.