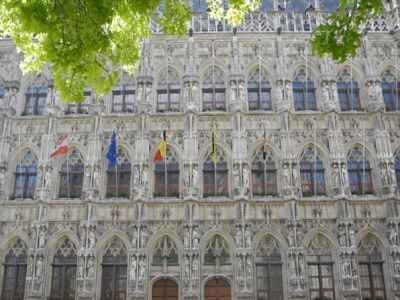 Our Club is one of a group of five European Rotary Clubs from France (St Quentin), Belgium (Leuven), Germany (Lüdenscheid) and Holland (Leiden) that have formed an alliance known as Pentangular.

Each year the Presidents and Presidents Elect of the five Pentangular Clubs gather for two meetings. One is held on the Saturday afternoon during the "Pentangular weekend"; the other is held in Leuven in late November.

The main purpose of the Leuven meeting is to discuss both the current Joint Pentagular Projects (JPPs) and also plan for future joint projects. The next Pentangular weekend is also discussed, as is the next Mini Group Study Exchange (MGSE, where students are selected by each club to come together and learn more of each other and their countries.)

This year the Leuven meeting was held on Saturday 25 November at the Novotel Hotel, near Leuven rail station. Our President Sharon Jordan and President Elect Margaret Griffin represented our Club. Past President Robert Boyd-Howell (currently Chair of our International Committee) was also present during part of the meeting at the request of our President. As usual, the Leuven meeting was organised and chaired by a secretary.

After some discussion of the MGSEs, the Leuven Club reported on the progress of Joint Pentagular Project 2 (JPP2) - which aimed to provide prosthetic equipment to people in the Democratic Republic of Congo.

Our Presiden Elect then presented a paper with the latest news from the Juba Secondary School that we also support (JPP3), and Robert Boyd-Howell gave an update on the progress of the funding for the Juba project. There was unanimous support and enthusiasm for the project from our Pentangular Partners.

There was also a presentation by the St Quentin club about JPP4. The President of Leiden requested that her Club, which will be organising the next Joint Pentangular Project (JPP5), can cooperate with us and the Juba school as one of the beneficiaries of that project.

Finally, Ludenscheid Club presented a paper on the development of the Joint Pentangular website.

After the meeting there was then a lunch for all the participants.

For more information about Pentangular, click here and here.

For further details of how we support young people, click here.