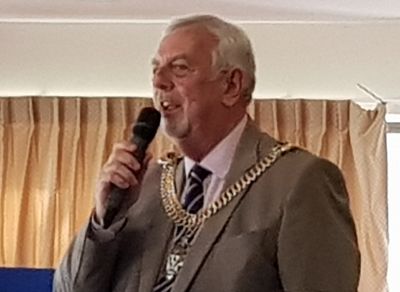 Our Club was honoured to host Councillor Colin Spooner, the Lord Mayor of Canterbury, at our lunch meeting yesterday.

Colin finds his life as Lord Mayor very busy - he has already had 600 engagements during his term of office. Nevertheless, he says he has enjoyed it enormously and is sad that his role will come to an end in May this year. In his words, he has "loved every minute of it!" He greatly appreciates going out into the community and getting a better understanding of Canterbury and surrounding villages.

Colin went on to tell us about his life and career. He retired six years ago from the Metropolitan Police where, for his last fourteen years there, he served as a dog handler. He had four dogs and truly loved his work, telling us “it was great to be a copper in those days”.

As he reflected on his time in the force, Colin told us a couple of amusing anecdotes. One was when, as a police dog handler, he and several other dog handlers had been asked to attend the American Ambassador’s Residence at Regent’s Park, London. They arrived promptly at 4am with their Sergeant in Charge and Inspector and the group was told that their role was to secure the area. Several long hours later they learned that a helicopter would land. After what seemed a further long (and somewhat boring) wait, during which the dogs were tidied up, the officers were told to “get on post and ring the green area”, which they did. Sure enough, an hour later a helicopter started to descend – it was the US President’s helicopter. On landing, to their surprise, out stepped US President Ronald Reagan. As Reagan approached the police officers with his characteristic swagger, Colin was disturbed to hear his dog growling. Fearing an embarrassing and possibly unpleasant encounter, Colin tried to avoid eye contact with the President - only to find the President continue to approach him. Colin nervously kept hold of the dog’s collar as the President came up to him. Then, just as he feared the worst and to his great relief, he heard the President call out, in his familiar drawl: “Sure got a good dog there, boy!”

On another occasion Colin was giving evidence at Croydon Crown Court so had left his dog at home. While being cross examined he observed the clerk pass a message to the presiding judge, at which point the judge asked the jury to leave and requested that Colin go to his chambers. Somewhat alarmed, Colin followed instructions only to be told that someone was trapped on the roof of his garage. He rushed home to be met by two Kent Police officers who told him that his dog wasn’t letting a man come down. It turned out to be his window cleaner who had been “garden hopping” from the adjacent semi to save time. The man had then noticed the growling dog…initially he’d felt safe until, as it was trained to be able to do, the dog started to climb the ladder. At that point the nervous man had decided he was safer by pushing the ladder away – which was how he had got into his current predicament!

Colin still goes back to his original station at Bexleyheath every year, but as he gets older he finds himself turning to the obituaries in the police magazine and looking out to see if the numbers of those departed are nearing his own number (which he never forgets!)

On retiring, Colin didn’t know what to do, so he acquired some dog boarding kennels and ran those for a number of years. Then one day the deputy leader of the Council, who used to leave her pet with Colin, was chatting with Colin when she suddenly stated "you’d make a good councillor, Colin”. And so, four years later, her was elected as one of the councillors for Seasalter. Soon after, he was proposed and elected as Deputy, working with Rosemary, and subsequently proposed and elected as Lord Mayor. It’s a position he feels honoured and privileged to be in. Reflecting on his declaration, which states that the Lord Mayor is Canterbury's "number one" citizen, he said “what an accolade!”; pointing to his heart, he said that still “gets him right there”.

Colin certainly loves both his role and the city of Canterbury. In a final anecdote he described being invited to the Deanery, beside the Cathedral, by the Very Revd Robert Willis. The Dean asked Colin to sit – but seemed to discourage Colin from sitting wherever Colin chose. Finally indicating a seat himself, the Dean sat Colin down. And then, in words Colin recalls clearly, he instructed Colin to “look out at YOUR Cathedral”... as Colin looked out across the garden to the Cathedral, looking glorious, before him. Perhaps it’s a sentiment that echoes with many of Canterbury’s residents.