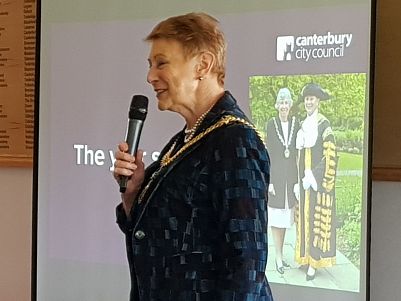 It was a great delight to have the current Lord Mayor of Canterbury, Cllr Rosemary Doyle, give a talk to our members recently about her work during her year so far.

As many readers will know, Rosemary is a member of our Club – although, as for other Lord Mayors during their term of office, she is an honorary member at present. The current Lady Mayoress, who accompanies the Lord Mayor at events and who plays a major fundraising role through the Lady Mayoress’ Charity, is Jenny Yonge, a member of Inner Wheel and wife of Rotarian and Past President of our Club, Robert Yonge.

Rosemary gave us an interesting synopsis of her very busy year, illustrated with plenty of photographs and anecdotes. Her talk started with a reminder that Canterbury is privileged to be the only district in Kent with a Lord Mayor. (Canterbury was granted a City Charter in 1448 which gave it the right to have a mayor and a sheriff, and the title of Lord Mayor was granted in 1988 when the 12th Lambeth Conference of the Anglican Church was held in the city.) Technically, the Lord Mayor is the ‘first citizen' of the district and the Crown’s official representative.

The Lord Mayor's main role is to chair meetings of Canterbury City Council at the Guildhall in Canterbury, and Rosemary's first role as Lord Mayor was to get Committees and Chairmen of Committees elected as the Council cannot meet until then.

Another key task for the Lord Mayor (with assistance from the Sheriff in briefing meetings) is to go through the list of upcoming events to which the Lord Mayor has been invited and decide which to attend. The Lord Mayor doesn’t get involved in politics and needs to steer clear of anything too controversial, so a lot of careful thought, effort and planning goes into this. Part of this work involves the Lord Mayor representing Canterbury at local and community events, often charitable ones, accompanied by the Lady Mayoress.

The Lord Mayor is also Patron or Honorary President of a number of local organisations such as The League of Friends of Kent & Canterbury Hospital (currently chaired by Rotarian and Past President of our Club, Viv Pritchard). The Lord Mayor tries to support these causes by attending their events where possible.

The biggest event of Rosemary's year as Lord Mayor (and one of her personal highlights) has been to help with the collection for the Lord Mayor's of Canterbury's Christmas Gift Fund and take part in the Christmas Carol Service in Canterbury Town Centre on Christmas Eve – on top of a bus in the company of the Archbishop of Canterbury and the Bishop of Dover, and with support from the Salvation Army’s musicians. Rosemary cherishes the joyful atmosphere and the view she had from the bus, looking over a huge festive sea of local faces.

A more solemn task for the Lord Mayor each year is to take part in the British Legion’s Poppy Appeal collection and lay a wreath in the Butter Market on Remembrance Sunday to represent all within the District. Rosemary also attended the dedication of the War Memorial a few days before the Remembrance Sunday ceremony.

Another important role of the Lord Mayor is to support important businesses – including attending Canterbury BID (Canterbury Connected Business Improvement District) meetings. To help raise awareness about businesses in Canterbury, Rosemary has opened a number of stores, cafes and restaurants since starting her term. She noted how this brought home just how much things have developed in Canterbury and Whitstable in recent times.

Rosemary has also been busy with the Lord Mayor’s Awards – the annual award scheme honours local individuals that go out of their way to help others. These people are nominated by members of the public, their friends, families and colleagues, with the final judging being made by a cross-party panel of city councillors. Rosemary recorded a message for this and sent out leaflets for nominees. She pointed out that it was a hard task to decide on the winners – “You can almost make a case for all nominees!” But she added that awarding the prizes was a great opportunity to learn more about each person’s activities.

Rosemary has also been present for various visits to the Guildhall, such as Inner Wheel gatherings and visits by students from twin towns etc. For the latter Rosemary dresses in her Mayoral robes and gives visitors an idea of how Guildhall is used these days. She finds people have a great interest in items such as the sword and mace, both of which have a great deal of historical significance.

Over her year in office (which will soon come to an end) Rosemary has been invited to do all sorts of things in an official capacity - from wading in a pool to planting a tree!

One of the more unusual tasks Rosemary has had during her term was to lead the Gay Pride March last June and address one of the largest ever crowds gathered at Dane John Gardens.

Rosemary has also been invited to a number of musical events - ranging from classical performances of the Canterbury Chamber Choir to a contemporary performance based around Dungeons and Dragons.

Our Club of course, has been very privileged to have the Lord Mayor attend events such as the English Speaking Union’s public speaking competition at the Guildhall and the Innovation Competition for young people.

Rosemary’s role can throw up plenty of challenges. For instance, attending so many functions does need organization of transport, regalia, clothes, shoes, and even handbags – and preparation for all sorts of weather and situations! Rosemary has found herself picking litter on a bitterly cold and windy day (she’d barely started before a blizzard kicked in!) An event at Whitstable Yacht Club had to be cancelled at the last minute because of a strong gale and huge waves. Water has also challenged Rosemary in other ways. When asked by the Parkinson Society to visit their hydrotherapy pool, for example, there was some concern about how to wear the Mayoral chains in the water – until someone came up with the solution of having chains printed onto a T-shirt!

Rosemary has found getting to know about the work of local community organisations and individuals to be one of the greatest pleasures of her job: "You so rarely hear these wonderful things reported in the paper," she said. She was touched and really impressed to see how many people work behind the scenes in various ways. She was also “very impressed” by the number of Rotarians she sees at various community events, reminding her of just how involved us Rotarians are in the local community.

Both Lord Mayor and Lady Mayoress are now looking forward with excitement to two of the last events of the year which will take place in May in aid of the Lady Mayoress’ Charity (which this year has been supporting Pilgrim’s Hospices and Porchlight) – a fundraising party and a bike ride. The ‘Going out with a Bang’ party will be held at the TA Barracks in Canterbury on Sunday 13 May with a carvery lunch and live music for guests, while the bike ride, on Friday 18 May, will see Rosemary heading for Brussels via Bruges and Antwerp to raise money for the Charity. Anyone wishing to attend the Lady Mayoress' party is requested to contact the Lady Mayoress. The Facebook page for the charity is here.

Looking back on her year so far, Rosemary said: “It’s been a real privilege doing this job – I’ve enjoyed it enormously and found out so much about what goes behind scenes in the District”.

We wish the Lord Mayor and Lady Mayoress well in their final events during their term in office.