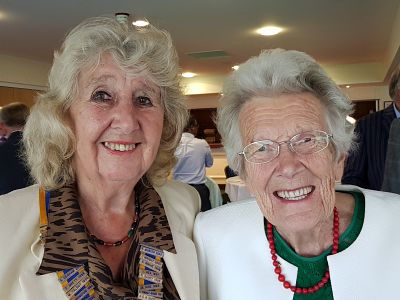 Our Members had a special treat the other day when Rtn Marjorie Lyle spoke to us of her memories about Canterbury 'before the Unis' – 1938 -1964.

Marjorie is a local historian and author, and was our first female Club Member when she joined our Club in 2007. She has had an incredibly interesting life and career – as was apparent during her long and detailed talk, sprinkled liberally with anecdotes and quotes.

In some ways Marjorie has been ‘around’ Canterbury since 1938. Back then, while her father was a Vicar in Maidstone, she recalls being invited along with other children to a Christmas party with then Archbishop of Canterbury Cosmo Lang. Highlighting Marjorie’s sharp recall of detail, she still remembers the snowy day and the feast of sandwiches, jelly and lemonade to which they were all treated. A special memory was shaking hands with the Archbishop and being told later that she had shaken hands with the hand "that put the crown on King George VI”.

During her talk Marjorie went on to talk about other personalities she has encountered in various ways over the years, including the “Red Dean of Canterbury” Hewlett Johnson, Archbishop William Temple, Catherine Williamson (the 1st woman Mayor of Canterbury), the Duke of Kent, Archbishop Michael Ramsey, Mahatma Ghandi, (spied through a window) and even Her Majesty the Queen – arriving in a daffodil yellow outfit for a Maundy Money Ceremony at the Cathedral.

As well as these encounters, Majorie had plenty of more personal stories to tell – including about her days at Ashford School under Miss Brake, who became the first woman Councillor and JP in Kent and told her students that “Anyone can do anything” (and many of them did); with Miss Margaret Babington, an energetic and central member of the Friends of Canterbury Cathedral; and with the “Miss Russells” – daughters of Major General John Cecil Russell who, at one time, owned Barton Court.

Marjorie moved to the City in the mid '50s and has played a very active life in the community since then. Aside from being a Rtn in recent years, she and her husband were both active members of Canterbury Archaeological Trust, remembering it from its early days – a time when parts of the town were still being rebuilt following damage during the war. Now of course we can all visit Whitefriars Shopping Centre to know more about some of the ancient finds.

It was quite remarkable to hear Marjorie speak; the MGSE youngsters were in the audience, and it will have been interesting for them to have heard a potted history of some of the places they had seen during their stay. In fact, on reflection, it was also a privilege for many of us to hear Marjorie's first-hand accounts of years gone by.