Marjorie Lyle - talk in aid of the Dean's Challenge 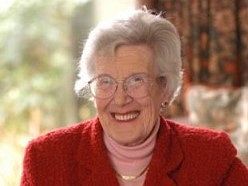 Marjorie Lyle is our first female Club member and her input into the club has been much valued. Marjorie will be giving a talk about some of the people that she has met over the years entitled "Canterbury Characters Remembered".

Marjorie has had a remarkable life and career. She has resided in Canterbury since 1955 and claims to have been "talking ever since!" She has been involved in lots of local organisations and activities and has also featured on radio and TV.

Marjorie originally graduated from Oxford and eventually found herself teaching history (in secondary schools) and local history (to adults). She was an Honorary Education Officer for Canterbury Archaeological Trust (when she ran a junior archaeology club, heritage weekends and visited schools) and has worked as a city guide since 1957. She still recalls the days when she would earn half a crown an hour for her guide work!

Marjorie is an ardent writer and speaker. She has written books about Canterbury - even children's books (which she wrote for her children, grandchildren and great-granddaughter). In 2005 she and her husband Lawrence received Civic Awards from the City of Canterbury for spreading knowledge of the history and archaeology of the city.

Marjorie received the John Hayes Award for her book "Canterbury: 2000 years of History" and in 2006 she become a Fellow of the Historical Association in its centenary year. As well as being a Rotarian, she has served as an almshouse trustee and Vice-President of Canterbury's Liberal Democrats.

Marjorie has an extraordinary memory and during her talk she hopes to give a few anecdotes about a number of "local characters" - including former Archbishop of Canterbury Cosmo Lang (who she remembers first meeting in the 1930s at a Christmas party when she was 12), several other Archbishops, Hewlett Johnson (nicknamed the "Red Dean of Canterbury" for his support of communism), Margaret Babington (author and indomitable organiser of the Friends of the Cathedral), and others.

Marjorie is very much our own local star and still lives less than three miles away from where she did when she first moved to the City. Do support her in aid of the Dean's Challenge to raise funds for The Friends of Canterbury Cathedral.

'Before the Universities; Canterbury Characters Remembered, 1938-1965'

Tickets £5 (or donations) at the door.