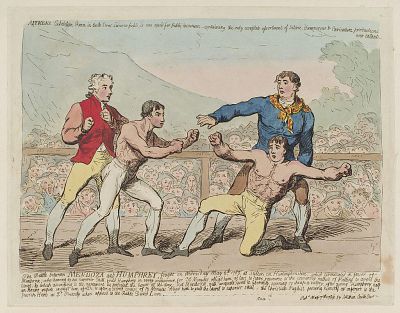 Part of a series of articles about our Members, helping you to know more about the things that we're interested in when we're not doing Rotary activities! Here, a Member talks about his fascination with his own family history (part 1!)

With some immodesty, I do claim some historical fame on my father's side (he was the youngest of nine) - it seems, through him, that I am a direct descendant of a world famous sportsman.

My paternal family tree has been traced back to a Spanish gentleman called Daniel Mendoza, born in 1689. Two generations later, born in 1764, was another Daniel Mendoza, the bare knuckle heavyweight champion of Great Britain (1792 to 1795). Given that he was only 5'7" and 160 pounds, this was a remarkable achievement.

Even as a youth, at the age of 16, it seemed that Daniel was into fighting ... unfortunately, outside the ring! He lost his job as a glazier when he thrashed the boss's son in a fight. Then, while working in a tea shop he defended his employer against a disgruntled porter in a fight lasting 15 minutes. Luckily for Daniel, an onlooker to the tea shop fight was a renowned boxer called Richard Harries, the "Gentleman Boxer". He saw some talent in Daniel, so took him under his wing and became his trainer.

Sadly, after a number of successful fights, Richard and Daniel had a falling out. A fierce rivalry ensued, leading to three public fights. The first, in 1788, took place at Odiham in Hampshire in front of 60,000 people. Mendoza lost after spraining his ankle in the 28th minute. Their rivalry continued and in 1789 there was a rematch in a specially built amphitheatre in Huntingdon. Daniel got his revenge, winning in the 65th round. So that made it "one all". The third, deciding fight, was held in 1790 - Daniel won, albeit in the 72nd round.

Daniel went on to became the first boxer to receive royal patronage - from Regency monarch King George IV. In 1792, Daniel became the nation's heavyweight champion by beating Bill Warr in only 23 rounds. However, his reign as champion ended in 1795 when he was punished severely in a match by "Gentleman" John Jackson -  who was 5' 11" and weighed a solid 203 pounds. Accounts suggest that in the ninth round Jackson grabbed Daniel by the hair, then beat him senseless!

As a proud descendant, I'd like to give some more accolades. Firstly, Daniel's picture hangs in the National Portrait Gallery; in 1954 he was officially named one of the first boxers elected to the Boxing Hall of Fame (some 190 years after he fought); and also, later, he was added to the inaugural International Boxing Hall of Fame.

In a book entitled "The 100 most influential Jews" he was ranked 82 - above escape artist Harry Houdini, artist Marc Chagall, and singer-songwriter Bob Dylan.

I should perhaps add that the actor/comedian Peter Sellers also claimed in his biography that he is a descendant of Daniel Mendoza...which links me to the Pink Panther! More research is needed!

And with that I end 'part 1'; part 2, which will be ready in the next week or so, will transport readers forward from the 1700's to the current era ... to the sleaze of Hollywood and some rather "colourful" books, when I shall introduce you to two very famous relatives of mine whose names you will probably know.

Update! By amazing coincidence, I saw this long article which mentions a David Mendoza - a genealogist from London who also claims to be a Daniel Mendoza descendent. Now I feel it may be possible for me to trace my ancestors even further back! The first challenge is to track down David down!