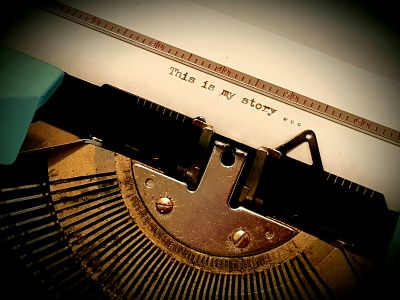 Part of a series of articles about our Members, helping you to know more about the things that we do when we're not doing Rotary activities! Here, a Member talks about her hobby of writing stories.

As a small child I was called "a little chatterbox" by our next-door neighbour. He'd always tell everyone that I had a very active imagination - so I suppose it was no surprise that it was that imagination that would lead me to having fun writing short stories.

When I was young my family moved around the country a lot - which meant I had no constant friends. Thus, summer holidays were spent reading, drawing ... and writing. One year, when I was about 7 or 8 years old, my parents asked what I'd like for my birthday. I'd seen my cousin with a typewriter a few weeks before - a pink, toy "Barbie" one. So "a typewriter" is what I tentatively asked for, thinking I'd never ever get it. Imagine my delight when I received a typewriter on my birthday, not a toy one, but the real thing! (The condition, naturally, was that my dad could use it whenever he wanted.)

That light blue, portable "Imperial" typewriter became my closest friend and confidante. Often, I'd sit there typing - one letter at a time - fictional stories, factual articles on things that I found interesting, and poems. When I was 11 or 12 years old I remember our English teacher asked us to write about our "favourite possession". While others wrote about their adored pet, their prized bike or nicest piece of jewellery, I wrote about my typewriter. Even then, I knew that the typewriter could be used to escape to a fantasy land where I could create my very own characters, settings and adventures.

When I told my parents that I might become a writer one day, they probably just smiled at me. It was one of many things I said I'd do when I grew up (along with being a doctor, scientist, graphic designer, artist and even hairdresser). But I wasn't deterred.

Those were the days before the internet, when libraries were the gateway to a whole new world. Inspired by David Bellamy, Jacques Cousteau and of course David Attenborough, I pursued my childhood love of nature by "writing" what I thought was an original A-Z book about animals (I had no concept then of plagiarism!) I'd sit in the reference section of the local library, painstakingly copying out a paragraph here and there about my favourite creatures. I'd already started cutting out pictures from magazines or drawing my own pictures to illustrate this "magnificent" book. But I didn't have all the pictures that I needed, so I started my "illustrated book" with random letters of the alphabet. "F" was for "fennec fox", a funny little creature with huge ears used to dissipate desert heat; "C" was for "crustacean" - largely because I simply liked the word, "M" was for "meerkat", as I had a great picture of a group of them, and "G" was for "gorilla" - because of THAT famous befriending scene with Attenborough. I still keep that folder of my illustrated pages, together with many of my childhood stories and pieces (both handwritten and typed), with the optimistic thought that one day I will indeed become the professional writer that I said I'd be, and will look back at them in amusement!

Well, many years passed by and I continued to write articles and stories as a hobby. The ideas for stories would be set off by things I'd see or learn about. "People" were my greatest inspiration, and I'd pass many bus, tube and train journeys making up characters based on the people I saw. I seemed to have developed a "formula" for my stories without thinking of it (not a very original one, I might add!). My characters would find themselves in certain situations, something would happen, and then my characters would emerge from the experience, often transformed by events.

Soon enough, school, then university, then work, ate into my time; exams for which I needed to prepare always seemed to be around the corner. Writing stories got abandoned. There was little time to spare for any personal indulgence!

After my studies ended, London became my base. It was whilst there that a relative mentioned that he liked writing stories too. He told me that a popular national newspaper in Bangladesh (where my family originate from) was planning an anthology of stories from people of Bangladeshi origin. I told him I'd send in a story...and promptly forgot.

On the day before the deadline date, my cousin asked if I'd sent in a story. I hadn't. So that night I stayed up late to write a story that had been going around in my head for a while - a story about a short encounter between two people from different walks of life. The following morning, I sent it off to the paper from my work email (my dial-up internet at home was painfully slow). Again, I forgot what I'd done - until, late one dull afternoon in the office, I received an email from the newspaper's literary editor. "Take a look at Friday's online paper," it said. So, I looked out for it - and sure enough, there was my story, accompanied by a colourful illustration! Turns out that I'd missed out on the anthology, but the editor liked my story so much he published it in the paper instead!

Thus, I was bitten by the "writing bug" - and found it hard to resist when the editor would ask if I had another story. I recall sending one story off to the paper without even reading it through. A few weeks later, I was skimming the paper and saw a story that looked interesting. I read the opening paragraph. It seemed vaguely familiar - and then I saw the author's name. It was me! I'd totally forgotten the story's plot and had to read it through to find out what it was about!

Well, that's how I started writing stories regularly. Over the years, several of my stories got published in the paper. (In the back of my mind I was so excited - this was how lots of famous authors had started their careers, and I now had enough to publish a book!) But I got busy again, and in the meantime the lit editor moved on to a new job. I was too lazy or distracted to pursue publishing stories further - instead, I continued to write them just for my own fun.

Time passed, my work changed. I DID become a writer of sorts eventually, but writing about factual health & science rather than imaginative fiction. But still, the dream is alive - and the writing bug remains!

Are you interested in writing stories? Look out for creative writing classes online and on youtube - there are lots to choose from. Write a blog, set yourself challenges. Keep a notebook and observe things around you, do mind maps, doodles, whatever gets your creative juices flowing. But most of all, have lots of fun!