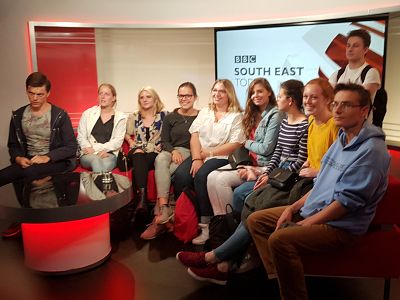 We had a great day out yesterday with our MGSE 'ambassadors' - visiting Kent Police HQ in Maidstone in the morning and, after lunch, visiting the BBC studio in Tunbridge Wells.

At Kent Police HQ the Mini Study Group Exchange youngsters heard about policing in Kent and had a chance to see the force control room that receives and dispatches emergency 999 and non-emergency 101 calls. They were also shown training facilties, saw tasering in action plus watched an amazing display of police driving skills.

Meanwhile at the BBC the MGSE group were shown around the studio, office and production room. They saw news desks, greens screens and weather dsplays, and got to hear about reporting and how graphics are produced. At 6.30pm they also had the chance to join producers in the gallery during the live broadcast of BBC South East News & Weather.

Overall it was a hugely informative day that left us all in awe of what each organisation does. And in the strangest of coincidences, the firearms team we were about to see in the morning were among the main news items in the afternoon's news!

So huge thanks to staff at both organisations, especially to Sandra, Ian, Carol, Pete, John & the Police Driving Team & their colleagues at Kent Police HQ, and to Caroline, Ron, Mark, Jonathan, Neil, Nina & colleagues at BBC South East.

Picture: Our MGSE group not quite 'making' the news! Picture credit: Rotary Club of Canterbury.