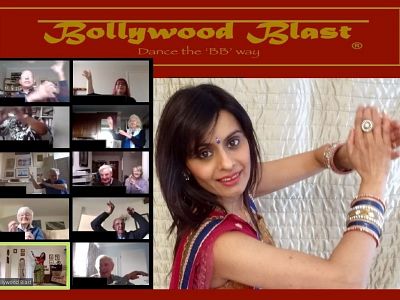 From meaningful classical Indian dance to the exuberant moves of Bollywood, we went on a journey in dance, touching on mythology and tradition along the way, when Minal Koria gave her "Bollywood Blast" presentation to our Members the other day.

Minal is passionate about dance, and teaches Indian dance in Canterbury, Hythe, Faversham and Ramsgate. She is a registered exercise professional and a professional member of People Dancing - a foundation for community dance. Her own journey in dance started when she was aged just one  - she shared a sweet photo taken at her first birthday party in which her aunt was clapping and singing while Minal was dancing!

We heard that Minal started to learn "Kathak" dancing aged about 5 years old from various visiting dance teachers from India. She said she was very fortunate to further her dance tuition under Guru Alpana Sen Gupta MBE (Kathak) and Guru Jayshree Panniker (Bharatanatyam). After a break to bring up her family and carry out her professional roles as a Dispensing Optician and Practice Manager, she started Bollywood Blast in 2015.

Minal, dressed in a traditional red and green outfit (and broadcasting via Zoom from her home in Kent thanks to Covid-19), told us that there are three key parts of Indian dance that we should all know about - the raga (melody), the tala (rhythm & beat) and the Rasa and Bhava (emotion/ sentiment feeling). The tala, we learnt, is often given by the tabla (an Indian drum) or by tiny bells worn around the dancer's ankles (several of which she showed to us).

We were told how hand movements In Indian dance tell a story; each finger, for instance, conveys the different elements. The first finger conveys air (vayu), the second space (akasha), the third earth (pritvhi), and the fourth water (apas). The thumb conveys fire (agni).

Minal then pressed her hands together in the traditional greeting that many are familiar with: "Namaste" she said, telling us this means "not me, you". The movement brings both sides of the brain together in a gesture of humility, while the fingers touching at their tips stimulate our nerve endings.

We learnt about the first dance Minal was taught – a dance dedicated to the teacher or guru (the word guru derived from words meaning "to remove darkness"). She showed us how she respects the earth goddess by touching the ground and then her heart. She also lit a small flame or diya, symbolising one's mind.

Minal then demonstrated a beautiful short dance. First, she stepped forward with the diya cupped in both hands, touched the ground as before, did a prayer, followed by a sequence of moves accompanied by sweeping hand movements and facial expressions - at one point turning herself around in a full circle.

We then learnt a little Hindu mythology - we were told the names of three gods/goddesses: Brahma (the creator, whose symbol in hand gesture involves putting thumb and finger together), Shiva (the destroyer, who is indicated with two hand gestures), and Vishnu (the preserver, symbolised by a chakra or circulating finger).

Minal then brought over a small statue of Shiva (Nataraja), and explained the symbols around him. In one hand he holds burning flames (signifying how he can destroy culture), in another hand he holds a drum (symbolising time and creation), one palm is facing forward (symbolising "do not be afraid"), while he points with his foot (symbolising steadiness). He stands on a small, demonic creature, symbolising ignorance, and he is surrounded by a circle of fire, symbolising numerous cycles of destruction and creation. Dance, we were informed, can be very spiritual - Minal herself found spirituality over the years through the medium.

Minal told us that although Bollywood dances are a relatively recent innovation (starting as they did alongside the Bollywood film industry), many dances still use elements of classic dance.

Another major influence on Bollywood dancing is Indian folk dance and folk customs. At this point Minal told us about the outfit that she was wearing, with a spotty tie-dyed “chunri” design. She spoke about a movie scene in which a lady asks her lover for a chunri - in effect, suggesting he asks to marry her.

Minal has had fun teaching dance by Zoom at Bollywood Blast (her company). Her groups often perform for the public, sometimes raising money for charity (the next fundraiser is for the charity Railway Children, that helps street children in India, East Africa and the UK).

Next, we got to see a very heartfelt dance, accompanied by a gentle folk song. This dance is special to Minal as it connects her with her ancestry, expresses her life position as a Mother-in-law to be, and is a classic class dance which has been learnt by class members solely on Zoom. This was followed by a more lively dance with some bhangra moves. Coming to an end of the energetic mini performance, she said "I'm a little bit out of breath - but also slightly elated!"

Minal then showed us what she called a "more cheeky dance", in which a girl flirts with her eyes. The dance was accompanied by rhythmic hand movements.

At this point Minal asked us to join in (though she asked us to make sure pets were out of the way first!) She went through a brief sequence of moves which some of our braver Members attempted to join in with. We also learned of an "un-named step" she does with her students in class, symbolising a beating heart. Richard, Sinitta, Bob, Margaret, Alan, Nan, Raj, Carol and Rosemary all joined in a little; the less courageous joined in with nodding heads and tapping feet! "Walk, walk, back, back," she called out, laughing that "this was the quickest I've ever taught this dance!

This was followed by a slower dance to cool down - the accompanying music like a ballad or love song.

At the end of her presentation Minal was given a warm round of applause before she was asked various questions from the audience, composed of Rotarians and some spouses. One Rotarian commented that the dances look "quite simple to do, but are very hard to follow!" We were told that both men and women dance and, in fact, Minal has a number of men who have joined her classes. We learned about the differences in dance between North and South India, and how each has influenced the other. We also learned of the transformation of dance - from village to temple to court and then, eventually, to cinema! "It's continually evolving," she said.

And with this we were brought right up to date with a dance routine named by a Blast class member  "the Covid step" - because “it goes up, it goes down, it goes back, then forward .. and at the end, we kick it off!"

We all look forward to putting those steps into practice!