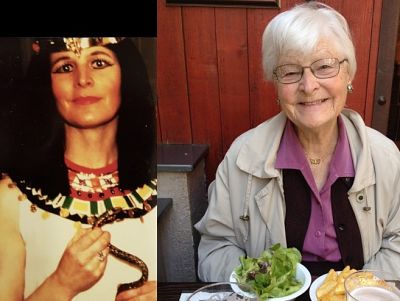 Time flies fast when you're having fun! 2007 was a historic year for our Club - it was the year when our first female members joined the Club.

Our first two female members were Marjorie Lyle and Nan Miller (the latter pictured here). Nan recently reflected on some of the activities she's been involved with in the 10 years since joining the Club, including her membership of one of our Committees. When Nan became a member of the Club there was no choice about which Committee to join. In Nan's case, it was the Vocational Committee; for Nan, it was a very interesting Commitee to join. Like several other members of the Commitee, Nan spent some time in the "hot chair" (i.e. as Committee Chairman). The most lasting of her ideas (and one she should be very proud of) has been the cooperation with the English Speaking Union for its Public Speaking Competition for schools. (We're delighted to say we still get involved with this and support it - just recently some of our members attended local heats).

Nan has also organised a number of visits over the years - to the Whitechapel Bell Foundry; the then air ambulance headquarters at Marden (when a helicopter landed just as they were about to leave, as though on cue); the Royal British Legion factory (where most of our road signs are produced) and several others. Her favourite visits have been to rehearsals of the English Chamber Orchestra, followed by a concert where Rotarians were able to meet the musicians and soloists during the interval (thanks to Nan's association with the orchestra over many years).

This year Nan also dressed up for our Halloween fundraising quiz night - in a wig she first wore dressed as Cleopatra back in 1969 at a fancy dress ball at the British Ambassador’s residence in Paris (which Nan describes as a fine building that had originally belonged to Napoleon’s sister, Pauline, and was commandeered by Wellington after the Emperor was despatched to Saint Helena).  Nan reassures us the snake she was carrying at the ball was not real.

Since Marjorie and Nan joined, the Club of course has had many more female members, and this year we have a female President (Sharon Jordan) and President Elect (Margaret Griffin).

Picture: Nan back in 1969 (many years before she joined the Club) and now.