Evening Dinner Dance and Pentangular at 50! 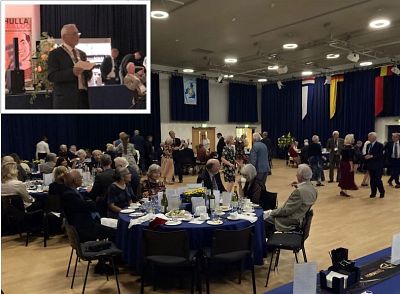 We marked the 50th anniversary of Pentangular with an evening Dinner Dance in St Augustine's House featuring the lively band " Hullabaloo".

The dictionary definition of "Hullabaloo" includes "confused noise" - but we are delighted to inform you that there were no confused noises at the Dinner Dance yesterday evening.

Following a drinks reception in the Atrium of St Augustine's house, guests, in formal attire, entered a beautifully decorated hall adorned with flags. There they were treated to a range of popular hits from the 50s and 60s played by the band - including well known songs from the Beatles and Elvis as well as some classic blues. "As soon as Stephen [Stephen Thompson, our President] and Sue [his wife] got on the floor to lead the dance it seems everyone joined them," said one of the guests.

During the evening Stephen gave a short welcome. Each guest was gifted a bottle of sparkling English wine in a bottle customised with the 50th logo and presented in a gift bag. The Presidents then took it in turn to make a toast of "friendship, understanding and service" in their own language before Stephen proposed a toast to the 50th anniversary of Pentangular. The Rotary Toast (Rotary the World Over) was given by Tony Loughran, our President Elect.

The evening was a great success with one guest emphasising how "lots of people said how much they had enjoyed the whole evening."