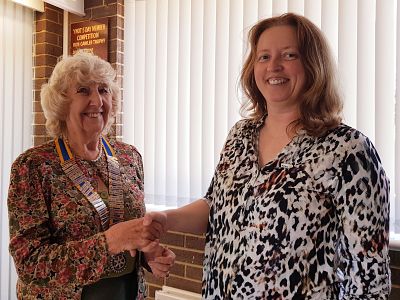 We were delighted to welcome our new President Dr Margaret Griffin into her role following the handover from our outgoing president, Sharon Jordan at our lunch time meeting on Tuesday.

Before handing over the Presidential regalia, Sharon reflected on her past year. She thanked all of our Members who have helped her during this time, particularly the Past Presidents who have provided advice and guidance whenever needed.

“I’ll take with me a lot of lovely memories,” said Sharon of her year – it was a year which included our annual duck race, two fundraising boxing events, the 2017 Innovation Competition, the Christmas Children’s Writing Competition, the ESU Public Speaking Competition, the Poppy Appeal, several fundraising guest nights, and support by our Club for a number of charities and causes locally and internationally (from helping poorly or needy youngsters to supporting little owls!) both in person power and financially.

Sharon was delighted with the monies that the Club has been able to raise over the year – particularly for her two nominated charities, the SCAT Bone Cancer Trust and the Kent, Surrey & Sussex Air Ambulance. She pledged her support to Margaret and wished for Margaret to enjoy her Presidency.

Our Members gave Sharon a warm round of applause, congratulating her on being our first female President and managing to carry out her Presidential role while working full time. We collectively wished her a good rest!

Margaret, who as President Elect of our Club has been chairing our Club Service Committee as well as being a member of Council, has been a Member of our Club since 2012. She is an Education Consultant – a background she has put to good use in helping develop a school in Juba, South Sudan, which our Club supports (look out for our update, coming soon).

Margaret stated that her life “has been one of service, and that in many ways all that Rotary stands for is all that she stands for”. She looked forward to “working together with people of like mind” and hopes the year will be “a year of fun, friendship and broadening of activities”. Her aim, she said, was to help “bring light to darkness,” both locally and abroad.

Margaret is very keen to get youngsters involved more closely with Rotary, and discussions about how this might happen are already underway. She also hopes to expand Rotary camaraderie by increasing the number of guest evenings. Finally, Margaret looks forward to a number of events this year: firstly, a fundraising farm event in July, hosting the mini group student exchange in August, participating in the District Conference to be held this year in Canterbury on District Conference on the 7th-9th September (organised by our sister Club, Rotary Club of Canterbury Sunrise) and an opportunity to engage with the St Quentin Pentangular Club in October.

Three charities were mentioned as Margaret’s Presidential charities this year: Porchlight (which deals not just with immediate situations but also helps prepare people for the future), the Juba School (with which she has close personal engagement) and Canterbury Food Bank (which faces struggles both financially and in terms of volunteers).

The meeting, held on this occasion at Canterbury Golf Club instead of our usual venue at the Kent Cricket Club, also marked the last meeting (as a Canterbury Rotarian) for Member Ian Wright. Ian, a Past President, has been a member of our Club for 30 years and in recent years has delighted members with his witty birthday poems and challenging quiz night questions. He will be sorely missed – but thankfully won’t be out of touch as he plans to join the Rotary Club of Dover, which is nearer his home. Coincidentally Ian, along with fellow Past President John Harris, were the two people who persuaded Margaret to join our Club during one Top Choir Kent event.

One of Margaret's first official roles was to present to President Elect, Neil Fraser, with his badge of office.

Also at the meeting Rotarian Julie Reza received the “Friendship, strength & energy” award (started by one of our Club’s Pentangular Partners, the Rotary Club of Leuven) for her work on social media and articles for the website. “I’m only able to write such articles because of the wonderful range of things the Club and its Members are involved in,” said Julie later during the meeting; “the website provides a great way of telling others what we get up to and raising the profile of the various causes that we support.”

To find out more about the President Margaret’s chosen charities, click the links below: