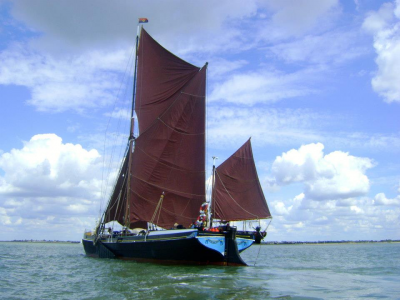 Our Club has provided funds along with some other local clubs towards programmes run by the Rising Sun Domestic Abuse and Violence Service. Here, Past President Richard Kemball-Cook describes a summer barge trip with some of the youngsters.

Richard is a part-qualified psychotherapist and volunteers as a youth worker at the Rising Sun Domestic Abuse and Violence Service, which is a local charity in Kent that provide services for women, children and families who are affected by domestic violence. He is involved with programmes that give 5- to 18-year-olds a safe place where they can simply 'be themselves' instead of having to cope with what may be serious family strife. Here is Richard's account of a trip held at the end of summer.

"It had been a lovely summer, with every day a scorcher: but today there was a force 7 gale coming in from the south west. I turned my face to the wind and saw the rain clouds massing. We were in the car park at Harty Ferry on the Swale. I'd persuaded my sailing club to part with £500 to support the programme, as one of the sailing club's aims is to introduce children to traditional sailing craft. We were about to board the Thames Sailing Barge (TSB) Orinoco, with ‘Frog’ as skipper, and with Jeff and Jim as crew.

The young men sheltering in their cars, each with a parent, were from the Rising Sun's adolescent group of youngsters. This trip had been planned as a fun day out for them. When youth workers Rob, Ben and I coaxed the ten youngsters to join us from out of their cars they still seemed in challenging moods. Nevertheless, with the wind at our heels we started the walk down the long causeway out into the sea, towards the small tender (transport boat) that was to take us out to the TSB Orinoco.

Our group climbed up the blackened side of this 150-year-old sailing vessel while she lay at anchor. As the wind rose and the rain came in the newcomers explored the old craft. Slowly they began to see that today might be different from what they'd expected. They descended below deck to see comfy sofas, a familiar kitchen, the bedrooms: a place of calm while all hell seemed to be breaking loose outside. I saw each of the youngsters having their eyes figuratively opened. This place was an alternate sanctuary for them that wasn't dependent on their coping mechanism. For once they could just be themselves.

Back out on deck we all got wetter and wetter. The wind was far too strong for us to go anywhere; instead, we stayed safely anchored and out came some crab lines to catch some crustaceans. (It was just as well that I’d stopped at Sainsburys earlier and bought some mackerel for bait!)

Soon enough the weather changed, so up at last came the anchor, a small sail was set...and off we went in search of seals. The youngsters pulled on the winch handles to raise the huge anchor, then went on to heave on the ropes to set the headsail. Amusingly, it seemed the wetter the youngsters were, the happier they were!

It was a dramatic day for all, and when we returned to shore after the day's adventure it seemed a different child was landed.

I would have liked to have been a fly on the wall during some of the journeys home. It certainly was good to have been part of the enlightening experience."