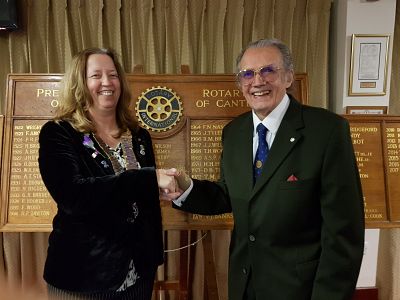 Today our members had the great pleasure of welcoming Robert Temple, formerly of the Rotary Club of Rochester, to our Club following his induction by President Sharon Jordan.

Robert claims to be a true Cockney by birth but says he is now “A man of the world”, having travelled from “Australia to the USA, from Norway to Brazil” in the course of his life. Presently he is well and truly settled in Canterbury after moving here recently. Following his move he discovered our Club meets just a short walk from his home – which makes a change for someone who has travelled so widely during his life.

As a young man Robert joined the military in 1948 and became a member of the 1st Royal Tank Regiment (1 RTR). He served with the regiment in various regions of the world, and was awarded a gold medal for his service in Korea (where his regiment helped repel communist forces during the Korean war). After that, a number of things have kept Robert busy over the years. At one time he played for Bristol Rovers as a professional footballer, and following that he was a Football Association coach, coaching in Libya, Yemen, Egypt, Nigeria as well as on the continent. He recalls living with Bedouins in the desert and jokingly says that may explain why he always seems to be moving around.

Robert also worked in the Embassy in Tripoli for some time, but his main area of work was in the automobile trade – meaning everything from cars to trucks. Again, his job took him travelling. He lived and worked in Nigeria for around six years, and his last job was as an importer of Porsche cars to Saudi Arabia – where he lived and worked for two years. In total he has lived 14 years with Arabs, and as a result retains a taste for Arabic food.

Robert professes to have retired five times, once coming out of retirement to work for SAGA cruises as an entertainer; he was an accomplished dancer, and again he travelled all around the world in the course of his work. He also played 5-a-side football twice a week.

Robert was a member of the Rotary Club of Rochester for around six years. He greatly enjoyed his time there, and being a social sort was assigned the “meet and greet” duties at meetings (here, we have Club members acting as stewards by rotation). He developed a love of Charles Dickens and has been active in the Dickens Festival that is held in Rochester twice every year, joining the parade dressed as a Victorian.

We look forward to working with Robert and no doubt will find a good way to use his knowledge, skills and love of dressing up.