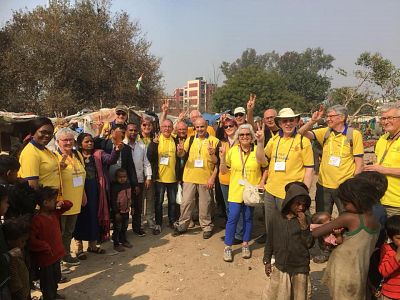 When Sinitta Nightingale came to talk to us about her trip to India and her experience of polio immunisation on Tuesday, we had a great chance to learn about Rotary in India from a young person's perspective.

When you become a Rotarian you become, in effect, a member of a global club and you can get great opportunities to help others while at the same time learning about different places, cultures and ways of living. Sinitta, who is a member of our sister club, the Rotary Club of Canterbury Sunrise, had a chance to travel to India and it was not a chance this India-phile was going to miss! It was interesting to hear about her personal 'journey' - in various senses of the word.

Sinitta has always had a passion for India and its culture, hospitality and colour, so she was pleased to have the chance to travel to India to help immunise children against polio (an initiative of Rotary International). As she is a keen Bollywood dancer, she told us she hoped to pick up a few new moves too while out there!

As the trip approached, however, she learned that the polio programme wouldn't be going ahead as initially planned due to a lack of vaccines in India. Sinitta was saddened by the news - but remained determined to travel and learn about a country that has always excited her. Moreover, it was a personal challenge - her first trip abroad by herself with people she had never met before. "But," she told us, "I'm glad I took the plunge as I made some wonderful friends and learnt so much about Rotary."

Arriving in India was a experience - her group was received by the Rotary Club of Bhiwadi and Inner Wheel ladies working together. There was Bhangra dancing to a dhol (drum), flower garlands and tikkas (a dot of colour applied to the forehead) which all told Sinitta they would be well looked after.

The Rotarians were very proactive, and Sinitta told us you could see their footprint everywhere! "For a minute," she said, "you thought Rotarians actually ran the small industrial city....We could all learn from how they get the word about Rotary out to the community!"

The Rotary Club had put a packed programme together for them. Sinitta knew they were in for a treat.

On day 1 they visited a school - they just walked into the classroom (which you wouldn't be able to do in the UK). The children were excited to see them and put on an assembly. Word had already got out about Sinitta's love of Bollywood dancing, and before she knew it she was led on stage to join the dancers. "My heart was beating so fast!" she laughed. As someone lacking in confidence before a crowd, she was amazed to find herself on stage being encouraged by the cheerful youngsters.

Their second trip was to a small (3-roomed) school for the disabled/those with learning difficulties that had been set up by a local philanthropist. The visitors all felt the school could do with extra support, so all hope to find ways of raising funds.

They also visited a sewing centre set up by the Rotary Club of Bhiwadi. There, women learn to sew so that they can earn an income from it. Graduating participants are each gifted a sewing machine. It was another project that inspired Sinitta - and of course she purchased one of their lehenga outfits!

Another school visit meant more dancing (with improvisation) - "there wasn't a frown in the room," declared Sinitta!

Yet another trip was to a local hospital. The contrast with the standards which we're used to in the UK was huge; buildings seemed dirty and were in disrepair. "It made me appreciate what we have in the UK," Sinitta told us.

On their final day the group actually got a chance to take part in the immunisation project, with help from another Rotary Club. They found themselves taken to a slum. After some important safety instructions, the group then helped administer polio vaccine drops to the children (thankfully, no needles).

Sinitta felt the last experience was life changing. Although she was upset at seeing the living conditions of the slum dwellers, she also felt humbled. "Despite a language barrier," she said, "they still trusted us." She is left puzzled by the stark contrast between the slums and "beautiful buildings" nearby. Somewhat forlornly she said she couldn't understand why there couldn't be a more even distribution of wealth.

The final moments in the slums were a bit more uncomfortable - groups of lads were gathering on motorbikes and the group felt it was outstaying its welcome.

Summing up, Sinitta told us "the visit not only helped me develop self-confidence and build new friendships, it also taught me [about] the valuable work we Rotarians do to help others....it has also taught me not to take for granted what we already have."

Finally, Sinitta encouraged us Rotarians to go out to India and take part in polio immunisation in Agra or Amritsar next January. It was clear the trip to India was life changing for her and she wanted us to feel that difference too. "I can't recommend it enough", were her closing words.

Picture: Sinitta and other Rotarians during their trip to India. Picture credit: Sinitta Nightingale.

For a few more pictures from Sinitta's trip to India, visit our Facebook page.