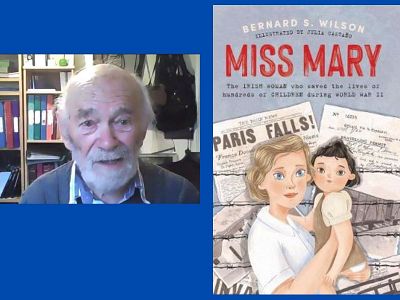 Have you ever heard of Mary Elmes? No? Nor had most of our Members when Bernard Wilson told us about this most remarkable Irish woman.

Bernard, who is a retired lecturer from Leeds, first spoke to us back in February 2021 – but there was so much to say about Mary that we invited him back. This article focuses on his first talk - and a follow-up article will focus on the second talk.

For Bernard, his interest in Mary (nicknamed “The Irish Schindler”) all started over 10 years ago – Christmas 2010 – when he received an email from someone he’d never heard of, a professor from Oregon in the USA. The professor told Bernard that as a child he’d been rescued from “certain death” from a concentration camp in France, and he wanted to know more about the person that had rescued him.

Bernard had written a blog which had caught the professor’s attention – a blog that Bernard had posted seeking knowledge! In it, Bernard, who lives in Canterbury, wanted to know more about his holiday home in Perpignan in the Pyrenees region of the south of France. Thanks to a book called “Love and War in the Pyrenees” he knew there had been concentration camps situated there in the Second World War, and that Jehovah’s witnesses and Gypsies had been incarcerated there. There was one chapter that had mentioned a Quaker refuge, which had interested Bernard as both he and his wife are Quakers.

Anyway, within a week of receiving the professor’s message, Bernard had found a Jewish organization that kept various records and had found information about the professor, his brother, and Mary, their rescuer. He went back to Rosemary Bailey (author of Love and War in the Pyrenees) and with her help and that of others managed to get in touch with Mary’s daughter, Caroline. It turned out that Mary had spoken little of what she did during the war, although Caroline knew that her mother had worked as an administrator in a hospital in Spain some time before, in the Spanish Civil War. Caroline had seen lots of items relating to that time, including children’s drawings and hand-carved items made of bone made by patients; there were many gifts that had been sent to Mary by grateful people.

The professor was keen to get Mary, who was Irish, recognized by a Jewish organization for her war efforts – but he needed to first get evidence that Mary had risked her life to save him and his brother. Bernard learnt that all of Mary’s “work” had been sent to AFSC (American Friends Service Committee), a Quaker organization. He was invited to Philadelphia to go through the 300 thousand-or-so digitized pages. “I was the worst qualified person to do this,” mused Bernard! Lucky for him, some records were held at a museum in Paris – and of course Bernard had his holiday home in France. So a 3-day trip followed in which he discovered all sorts of things about Mary…but nothing about her life-saving work.

Further investigations and other academics got involved before they found what they were looking for: a telegram from London to the [Quaker] head office asking to try and save the family; Mary (who was not a Quaker) had said she would rescue the two children. What she had then done was take the two children to an old hotel in the mountains where they “disappeared” (i.e. were hidden). From there they were sent, via the UK and Canada, to the USA.

In a special ceremony in June 2014 Caroline was given a medal for her mother – yet, despite press coverage in France, no-one in her native Ireland at the time knew of Mary’s work. That was until a reporter in Dublin picked up the story and it eventually got coverage in the Irish Times. “That’s when my phone started ringing!” laughed Bernard.

First, he was invited to give a talk to a women’s business group that wanted to posthumously honour Mary. There he met an Irish journalist, Clodagh Finn, who asked for his help to write a book about Mary. It had become clear that Mary had rescued hundreds of people, all then quite elderly, and Clodagh needed some help with the task. Bernard didn’t feel in a position to help, but Clodagh’s book – which was quite academic in nature – was written and eventually got published as “A Time to Risk All”.

However, the idea to publish something for children germinated in Bernard’s mind – which is how he landed up writing “Miss Mary” a book (with the title being the name that rescued children had called Mary) aimed at small children.

One chapter in Miss Mary tells the story of a girl called Charlotte who had been rescued by Mary. Bernard recounted the story of how Charlotte’s mother had written a message to her daughter to go with water and rice sent by Quakers. The message did not reach Charlotte then – but 75 years later it was found as a result of all the research and delivered! The now elderly Charlotte was very emotional to read her mother had sent “a thousand kisses” all those years before. And that was not all – one thing led to another and a photo of Charlotte’s mother was found! Charlotte had never seen a picture of her mum, so this was very touching.

Mary, it seems, had helped smuggle many children out of camps using false names and papers. Although not death camps per se, many died there because of disease and malnutrition. The authorities seemed willing to let the children be taken away as it meant they no longer had to look after them.

Bernard told us that Mary was eventually found by the Germans in February 1943 in the then occupied South of France. She was arrested by the Gestapo and taken to Toulouse Prison and from there to a prison in Paris. Thankfully, she was only there for 6 months before being released – perhaps because of her Irish (then neutral) nationality. Apparently, asked about that time many years later Mary had remarked “we all suffered some inconvenience, didn’t we?”

Since writing Miss Mary, Bernard has been busy giving numerous talks and has visited a memorial in Mary’s name. He told us that there was lots and lots more he had learned about Mary…so we invited him back for another talk which we will write about soon.