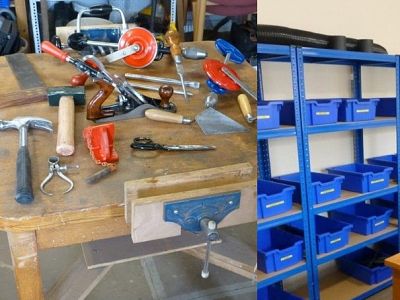 We are delighted to have helped the Canterbury Branch of UK charity Tools for Self Reliance buy a Portable Appliance Testing (PAT) machine with a donation made jointly by our International and Community Services Committee.

The Canterbury-based branch of Tools for Self Reliance (TFSR) is currently based in the Pilgrims Hospices premises in Canterbury, and our club has long supported their work. The new PAT machine will allow the group of volunteers to test electrical equipment that they refurbish.

Last summer, a group of us were shown around the workshop – which is an exciting joint venture with Pilgrims Hospices. We learned how old tools are refurbished by volunteers before being sent to Africa to help people learn new skills and set up new trades.

Tools that are no longer being used (e.g. blunt chisels, dull planes) are refurbished by the small team of volunteers and form parts of self-contained kits that are sent out to six countries in Africa: Ghana, Malawi, Sierra Leone, Tanzania, Uganda and Zambia. These kits are then used to help improve the livelihoods of people in those countries. Those that are helped by TFSR include the rural poor and vulnerable groups such people living with HIV/AIDS, the disabled, and young people affected by conflict.

The Canterbury workshop is based at the Pilgrims Hospices site in London Road; it has been based there for around five years. Initially, the group of volunteers just had a room on the first floor – which was a challenge for hauling heavy equipment. But a couple of years ago the hospice kindly allowed them to set up in a room downstairs. They are now nicely set up with a work bench, plenty of shelving for donated tools to be worked on, and two vacuum extractors to help remove dust particles from the air (both donated by Rotary). We were kindly shown around the site by John Burton, who oversees TFSR Canterbury and told us about their work.

TFSR’s headquarters are in Netley Marsh in Southampton; from there the charity sends refurbished tools to Africa every few months in huge shipping containers. By working with other non-governmental organisations (NGOs) that provide training in trades such as carpentry and building, TSFR are able to help individuals – or small cooperatives – set up their own business and earn a living. This, in turn can help their families – the tradesman are able to put food on the table and pay for education for their children. In fact, it’s not just men that are set up in trades – thanks to the donation of old sewing machines (such as the classic Singer machines, or more recently, electric sewing machines), women are also able to set up small tailoring businesses.

The first thing that the Canterbury team does on receiving donations is decide if the tool is suitable for a refurb – tools need to have a long prospective life once refurbished. The tools are then separated into categorised boxes – e.g. one for mallets, one for tenon saws. Tools are then fixed, sharpened as needed, cleaned and lightly oiled with linseed oil. (TFSR headquarters provide them with a list of specifications to which they work). Most of what the Canterbury team does is done by hand – though they also have a polishing machine and grinder. Rotary provided machinery to sharpen wood chisels at the requisite angle. Our group were shown a ‘demo’ before and after kit, showing the condition in which the team might receive tools and the refurbished condition that tools are in after being worked on, ready to be sent off to Africa.

John told us how the Canterbury group first started out. Initially another John (Sutherland, a Rotarian and a master builder by trade), wanted to help people in Africa in a similar trade. He used to collect tools and then deliver them to a lady called Elizabeth who subsequently hired a van to take the tools to Southampton. John (Burton) got involved when he saw a TFSR stall at a fair when he was in the process of retiring. He contacted TFSR to find out if they had a group in Kent – they didn’t, but they told him he was welcome to set up a group! And, after visiting TFSR’s main workshop to see how they work, that’s what he did.

John has been active in getting support for the group – he initially contacted local service clubs such as Rotary and Lions clubs. He didn’t get many replies, but not giving up easily, he wrote again. This time he got a reply from our sister club, the Rotary Club of Canterbury Sunrise; they suggested he contact the hospice. He did so, and learnt they had two rooms to offer for no rent and with no charges. The hospice subsequently got funding from elsewhere to expand.

TSFR Canterbury is unique in that, as well as refurbishing tools. it aims to help ex-armed service personnel and the spouses of those who are patients in the hospice. In both cases, the individuals not only get a chance to take part in something that is worthy and helps others, but they are able to continue to use skills they have or learn new skills, while enjoying some routine and camaraderie with fellow volunteers. The group’s numbers are gradually increasing and they now have around 12 regular volunteers.

John also told us about some ‘transient’ members. One was a lady who had lost employment following a back injury. She volunteered as a form of therapy – though she had to leave when she got offered a new job! Another young lad in his twenties was temporarily in Canterbury. He didn’t want to be ‘twiddling his thumbs’ before he headed out to New Zealand, so found the workshop a useful stop-gap. At present there aren’t any young people involved with TFSR, but they are exploring synergy with Canterbury’s Prince of Wales Youth Club.

Health and safety are important for volunteers – there are risk assessments to complete and TFSR provides 3rd party insurance. All tools that they work with must be handled safely and when they leave the workshop they need to be fit-for-purpose and safe.

There are a number of costs for TFSR – most notably for consumables. A spinning disc, for example, costs around £12 and they go through one every month or so. In total, they estimate they spend around £300/year on consumables.

The Canterbury group receives regular emails from TSFR informing them of what's understocked. But, in general, they are always on the lookout for trade tools that can be refurbished and that would have some longevity. On occasion, they do receive other tools (e.g. gardening tools) which they are able to pass on to other groups and charities. Some items not suitable for Africa are used to raise funds e.g. via boot fairs (where the profits help the Canterbury group) or via ebay (where John has set up an account via which all sales money goes to TFSR HQ). (John told us that they do receive some unusual items, some of which can be of some value. For instance, a ‘Compass’ wood plane made by Stanley Rule & Co – acquired via one of our Rotarians, Bob Anderson – sold on ebay for nearly £100.) On another occasion Bob helped a local family have a clear out following the death of a family member. A number of blankets were donated to local charity Necessary Furniture; other blankets had not been opened and were sold on ebay for over £50. Items sold on ebay in the last year raised almost £200 for TFSR HQ. Items that cannot be used, repurposed (e.g. an old plane may have re-usable timber) or sold, and with no scrap value, are recycled.

The Canterbury group are always interested to hear about donations of tools. While they only used to take on industrial quality electrical tools, improvements in power supply in Africa and in quality of tools has meant that some electrical tools can now be sent to TFSR. This also applies to sewing machines – where once they would have only taken hand-machines they are now able to take working electrical machines, so long as these still have instructions and are suitable for a 240 V power supply.

TFSR “don’t just send any old tool to any old person” – by working with the local development agencies that provide training, specific tools are sent to specific people at specific locations. Thus, a carpentry tool would only be sent to someone who had undergone carpentry training. Such training also includes some business training as well as training from which the whole family can benefit – e.g. training about education for children or training on health topics. The range of tools and trades now covered by TFSR includes: electric welding, electronics repairs, bicycle repairs, shoe repairs, blacksmithing, metalwork, and tailoring/sewing.

Recipients may choose to work on their own or in a cooperative, the latter being more resilient. Depending on needs, a one-, two- or more person-toolkit might be sent out. Each toolkit has a prescribed list of tools and is not sent out until it’s complete; these kits are checked again by TSFR prior to being sent out to ensure money is not wasted. The containers sent from TFSR’s large warehouse then go by ship to the destination – often taking as long as three months to arrive. One of the NGOs then takes delivery of the pre-labelled kits, avoiding loss, pilferage and so on.

Every couple of years someone goes from Southampton to Africa to carry out an audit and interview some of the beneficiaries about how the kits have made a difference to their lives. John gave us some examples. For instance, a man initially trained in bicycle repair has since moved on to motorbikes; he’s also managed to buy a van, allowing him to do some roadside recovery. In 5 years’ time he plans to be going to China to buy the parts he needs rather than rely on a supplier! Meanwhile, a woman that received a sewing machine and initially trained in dressmaking has progressed from tailoring to having her own shoe-making business.

There are around 750 TFSR volunteers around the country and, in total, around 25,000 tools were sent out from Netley Marsh last year. The local group refurbished around 350 tools and also raised money for TFSR. Naturally, they would welcome more volunteers – ideally refurbishers. But volunteers don’t all just work with tools. One current volunteer spends time doing the bootfairs, selling some items at the same time as increasing awareness about TFSR’s work.

TFSR Canterbury are hoping to increase the number of volunteers to 20. However, there are concerns about the long term future of their premises after the new Hospice is built as there is unlikely to be spare space available for TFSR on the new site.

If you or anyone you know would like to volunteer or has tools or other items to donate, please contact us by email, putting 'FAO Bob Anderson/TFSR' in the subject line.