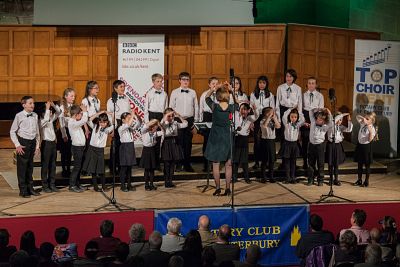 After eight years and over £50,000 raised for local charities, Canterbury Rotary’s Musical Director for Top Choir Kent, John Harris, with the tremendous support team work of members behind the scenes, can be justifiably proud of Rotary’s achievements. The evening of April 8th saw yet another choral extravaganza comprising numerous all age voiced choirs raising the roof of a packed Shirley Hall. Professionally compered by BBC weather forecaster Nina Ridge the evening flowed with musical entertainment.

First off were Monday Music. Their musical director Grenville Hancocks explained that the group were not really a ‘choir’ but a very mixed group of individuals who come together to sing in order to feel better. They are part of a group based at the Beaney House of Art and Knowledge in Canterbury. They sang a varied programme including ‘Singing on a Monday’ composed by Grenville himself. A number in this choir have medical ailments or handicaps but find singing to be very therapeutic.

Next we were blessed with the Elham Valley Voices (seen below), the choir chosen by Dan Tomkinson to go forward to perform in the Canterbury Big Sing in the Marlowe Theatre on the 18th April. These were a group of immaculately dressed children aged from 5-18 years, but it seemed most of primary school age, who, meeting once a week after school, proceeded to sing their hearts out, including the two five year olds in the front row!. They were wonderfully led by Jackie Spencer, who has an excellent track record of directing award winning children’s choirs, with many of the children coming forward to sing fine solo sections. 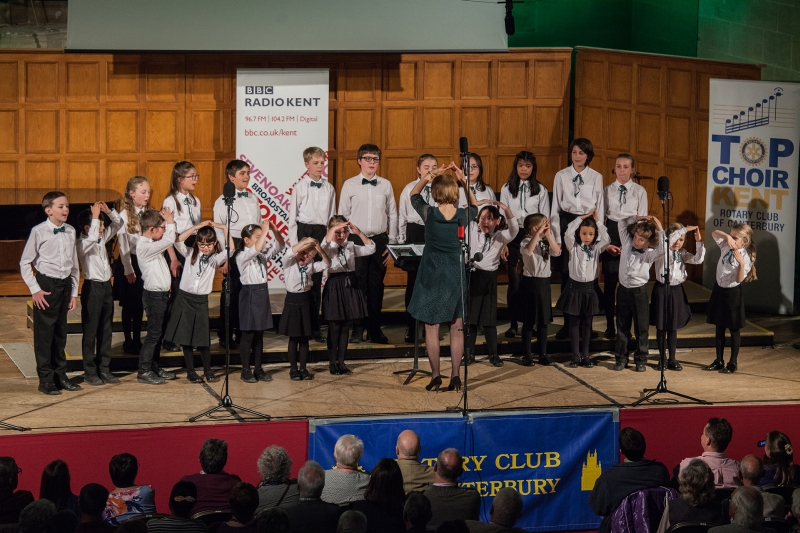 We were then entertained by an all women a capella chorus from Bromley, Just Voices, whose varied offerings gave much delight especially their rendering of ‘Boogie Woogie Bugle Boy’ from the film Buck Privates, with its crisp rhythmic beat, being the highlight of their performance. We then heard the only auditioned group of the evening, the Simon Langton Grammar School for Boys all male 4-part chamber choir, whose stunning performance raised the standard of the evening to a new level. They performed an interesting and very well-received programme, remarkable considering they meet for just one hour a week to rehearse. The real highlight was their rendering of ‘Summertime’ from Porgy and Bess, featuring the wonderful solo voice of their musical director Emily Renshaw-Kidd.

After the interval we returned to enjoy the highly professional-sounding performance from the Pharos Chamber Choir from Dover, directed by their founder/director Stephen Farrow. Although the smallest group of the evening their fine voices filled the hall with their precise and clear diction. Particular highlights for me were the women singing ’Lift Thine Eyes’ from Elijah by Mendelssohn followed by the men, only seven in number, filling the hall with the sound of Morte Criste by Emrys Jones. They finished with ‘Rhythm of Life’ from Sweet Charity which was rewarded by thunderous appreciative applause from the 500 or so audience present.

Nothing however could have prepared us for the finale, which was performed by last year’s winners, an all-male barbershop group from Bromley, the Kentones, directed by the remarkable Peter Kennedy. As the motley dressed group of policemen and cloth-capped workmen strolled onto the stage we wondered what was to come. From the moment they opened their mouths we were entertained by the awesome sound of 60+ male voices singing and moving like professionals. Their final number ‘Do you hear the people sing’ from Les Miserables, combined with all of the other choirs, now singing from the back of the hall, produced a surround sound effect that was absolutely spellbinding.

Once again Canterbury Rotary have come up trumps by not only providing a wonderful performance opportunity for Kent choirs but also by raising considerable sums for their this year’s President, Martin Ward’s chosen charity Porchlight. The evening was broadcast on BBC Radio Kent at 6pm on Easter Monday.