A treasure hunt around local villages 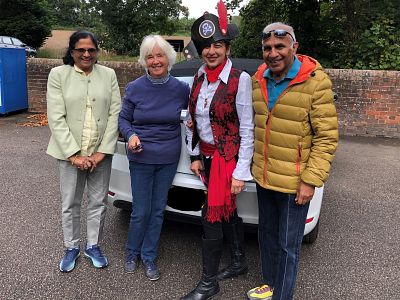 Who can resist a hunt for treasure? Well, not us Rotarians it seems - even if the treasure in question is just the solution to a set of complex clues!

Our Members (and invited guests) always enjoy a challenge - especially one which gives us a chance to have some fun together while seeing some lovely parts of the local area.

This particular treasure hunt saw us all gathering together in teams (four people per car) at Chilham the other morning to receive instructions, special clues and a map from organiser PP Mike Talbot. Everyone was excited about the hunt - though one Rotarian went a little over the top by turning up as a treasure-loving pirate, despite there being no ships or sea in sight! "Ahoy, me hearties," she called out as she greeted other treasure hunters.

The challenge involved driving around the villages/areas of Chilham, Challock, Leaveland Corner, Bells Forstal, Throwley Forstal, Belmont, Eastling, Newnham and Doddington to solve 11 cryptic clues set in rhyming verse by Mike (one clue had to be changed at the last minute because one business had changed since Mike set the clues!) Along the way we got to learn about some local buildings and history.

After the final clue we all headed to the Alma in Painters Forstal, where we were joined by other Rotarians and guests and enjoyed a delicious two-course meal.

Having solved our 11 clues, the answer to each being a figure or number, we had an anagram of letters and numbers to unscramble. (If you're a Rotarian, have a go at solving it - answer beneath the picture caption below).

This took some head scratching, but each team jotted its answers on a piece of card to be judged by Mike. Correct entries were put into a hat from which President Stephen Thompson pulled out the winning entry: Car 5 (Gill, John, Maruthi and Julie). The winners were awarded a special certificate - which, no doubt, they will "treasure" always!

We ended our jolly jaunt with thanks by Mike to all who took part and to Rtn Philip Abbott for helping with the maps and certificates. In turn, Stephen led a vote of thanks to Mike & wife Jean for setting such a great challenge. He also led a round of applause for the hardworking Alma staff.

In the end the treasure may not have been shiny gold coins and gaudy jewels-a-plenty, but something much more valuable. Priceless in fact: friendship and camaraderie, a bit of local knowledge (and a full stomach).

Picture: Members of the winning car, No. 5 - one of them went over the top on a treasure hunt theme! Picture credit: Martin Ward/Rotary Club of Canterbury. A few more pictures will be added to our Facebook page shortly.

(Solution to the anagram: DISTRICT 1120 - our Rotary district!)