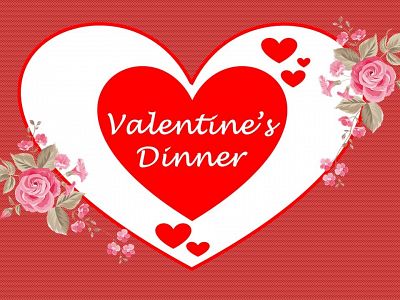 This year Valentine’s Day was celebrated on the evening of 12th February during a Valentine’s Dinner at which several Club Members and their wives gave Valentine-related presentations from different periods and cultures.

The evening kicked off with Chair of our Community Services Committee, Past President David Barton, giving a potted 2000 year history of Valentine’s Day - which started as the Roman Lupercalia Festival of Fertility and later came to honour the Christian martyr, Valentine. David then went on to present the evening’s speakers.

Marjorie Lyle (who we reported on separately in relation to her wedding anniversary) recited “Let me not to the marriage of true minds”, sonnet 116 by William Shakespeare. This most British of beginnings was followed by a translation from original Bengali of “Number XXXIII” from the book “The Gardener” written by Indian laureate Rabindranath Tagore and presented by Rotarian Nan Miller. Next up was Rtn Andrew Barchi with “A true Valentine’s Day anecdote”. Philippa Davies then presented “Olympic Girl” & “Subaltern’s Love Song” – both by John Betjeman. Humorous poet Pam Ayres had two of her ‘ditties’ read out - “How I loved you, Ethel Preedy, your neck so long and slender” and “Will anybody marry me?”, presented by husband and wife team Alan and Diana Forrest. PP Alan also presented “Love is a Sicknesse” by Samuel Daniel (1562-1619) while Diana followed up with “Maybe we’ll make it” by Judith Viorst. More humour came from PP Martin Ward who recited “I climbed the door and shut the stairs” (Anonymous) and an extract “The Happy Bounding Flea” by Ogden Nash. Next up was another husband and wife duo, PP John and Joan Hill, who presented “Smartphone” and “Silly Valentine” by Judith Fuchs, respectively. Heather Scott presented the classic “The Owl & the Pussy Cat” by Edward Lear, while Sheila Boyd Howell recounted “The story of how she met Robert” – the Robert in question being PP Robert Boyd Howell. Finally, Rtn Alan Mepstead brought guests up to modern times with edited lyrics from 20th Century Troubadours the King, Randy Travis & Rod Stewart. The standard of presentations was excellent and congratulations are due to all the performers.

During the evening there was also a raffle in aid of the Presidents charities (Porchlight, Juba Diocesan Secondary School, and Canterbury Food Bank), and at the President’s suggestion guests changed places half-way through the evening to increase the opportunity of talking to more people.

The evening seemed to be enjoyed by those who attended - in total there were nearly 50 Rotarians and their guests at the dinner. Because chocolate is the food of love for many, it was appropriate that the meal finished with a delicious chocolate tart!

Summing up the event, David Barton stated “It was a pleasure to talk about a custom designed to promote respect and commitment between the two people… The evening was an opportunity to enjoy the importance of poetry to a topic such as this.”