A virtual double induction at our Evening Meeting 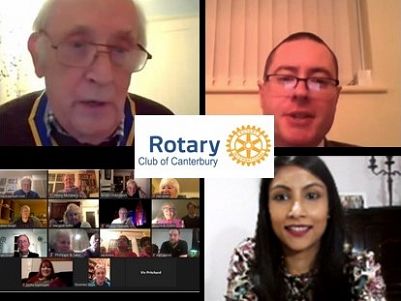 We had a very exciting start to our Meeting yesterday as President Alan Mepstead inducted TWO new Members in our Club's first double induction - all by Zoom as well!

It's very encouraging to see our Club grow at a difficult time like this, in the midst of a pandemic and great local, national and international uncertainty. It's both a testament to the activities and friendliness of our Members and the enthusiasm of the newcomers.

The two newbies are Shabana Raman and Crispin Rampling.

Shabana, who has joined our Members on a number of occasions, was introduced to our Club via Rotarian Rosemary Doyle. Rosemary said she would "totally commend Shabana," who she has known for a number of years.

Crispin was introduced to us by PP Harry Cragg. Harry has also known Crispin for many years, going back to when Crispin first became a councillor. Referring to Crispin's past work in the local area, Harry added: "I know Crispin will always help the community".

Talking of the double induction, President Alan Mepstead said "This is the highlight of my presidential year so far" and then joked that by having the joint inductions "Neither of you can ever say one was a Rotarian longer than the other!

Wearing his ceremonial President's necklace and watched by our Members over Zoom, Alan read out official words of Rotary induction and welcome before inviting Shabana and Crispin to say a few words of their own. Both voiced their desire to be part of Rotary and serve the community. More informally, President Alan said it was great to have both on board, adding "I'm sure I speak on behalf of everyone when I say that we are all looking forward to working with you." He apologised that he was unable to handover badges to the new Members due to the current lockdown.

We were delighted to welcome both Members, and were also pleased that the meeting was attended by quite a number of Rotarians and guests - including a visitor from the Rotary Club of Hawaii (Tam Martin Fowles, from Plymouth), prospective Member Alex Lawson, and Sinitta Nightingale from our Fellow club, Rotary Club of Canterbury, Sunrise.

We will post a little about each new Member in separate articles.

Picture: Our President with the inductees and some of the Members and guests present. Picture credit: Rotary Club of Canterbury.