Trips: A warm walk in the Kent countryside 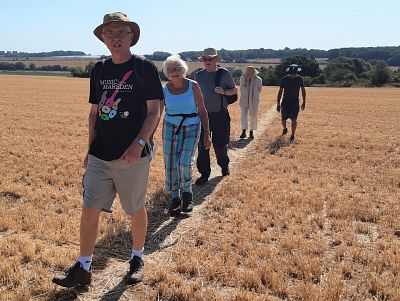 On 7th August - one of the warmest days of the year - 11 assorted Rotarians, including one or two partners and one honorary Rotarian dog, set off to enjoy the rolling countryside around Chillenden and Goodnestone.

The walk had been planned by Past President Viv and his wife, Inner Wheel Member Pauline Pritchard.

Following appropriate guidelines, each led one of two groups along footpaths across the Kent countryside. (The route had been prospected by the leaders beforehand, and the groups set off at different times.)

Despite the hot sun and scorching temperature, the intrepid groups managed to walk all the way from Chillenden to Goodnestone and back.

Initially, the paths they followed crossed big, harvested cereal fields (the same glorious colour as Toffee, the golden retriever), before the paths plunged (luckily, for quite a bit of the walk) into the blessed shady relief of the so called “Serpentine” woodland walk around Goodnestone House.

Numerous pauses for refreshment (both human and canine), allowed the walkers to take in the fine views - to the distant sea, the now limbless Chillenden Windmill, the ice house and almost dolls’ house-like Georgian Goodnestone House. They then joined a further byway (part of the old Pilgirms’ Way) and footpaths which eventually took them to the Griffin’s Head pub at Chillenden. There, some of the walkers, joined by a couple of other Rotarians, enjoyed an excellent, socially distanced lunch in the shaded garden. In total the walk was round 4 miles.

Despite the heat, all the walkers agreed how good it was to meet face to face and without Zoom between them - the first time since lockdown.

Many thanks to Viv and Pauline for organising the walk, to Brian Dobinson and Viv for text, and to Rajini & Raj Dasan for pictures. Further pictures from the walk can be seen on our facebook page.

Picture: One of the groups during the walk. Picture credit: Rajini Dasan.