Visit to Whitstable and intro to charity KidsOut 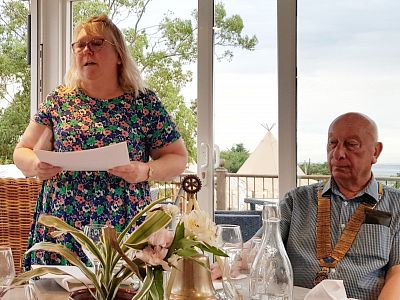 Some of our Members enjoyed an outing themselves when they visited Whitstable for the Rotary Club of Whitstable's meeting; there they heard KidsOut Ambassador for our Rotary District (1120), Soo Johnson, speak about charity KidsOut.

The Rotary Club of Whitstable, which was formed in 1957, currently meets each week at The Crescent Turner Hotel  – a pretty little hotel with an amazing sea view. (Sadly, the sky was filled with white cloud on our visit – which meant we missed seeing the stunning sunset over the seas which was seen from the hotel the evening before.)

We enjoyed a friendly welcome from the Whitstable club's President, Tony Rix, and fellow Whitstable Rotarians. After brief introductions and our meal, we had the chance to hear about KidsOut - the "Fun & Happiness" charity that gives disadvantaged kids (particularly those fleeing from domestic abuse) across the country positive experiences.

The charity, said Soo, wants to "make as many kids as it can happy, even if for only one day".

It all started in 1990 when Lady Grantchester (a member of the Moore’s family and one of the owners of Littlewoods), approached the Rotary Club of Kingston to take some children on an outing; this resulted in 200 children being taken out to Thorpe Park. It proved such a success that Lady Grantchester started to offer one-off grants to any Rotary Club willing to take part in a similar event on the second Wednesday in June. This has now transformed into "National Rotary KidsOut Day," with tens of thousands of children being taken out on the day (or, now, any day of the year!)

KidsOut registered as a charity in 1999 and since then has helped huge numbers of vulnerable youngsters enjoy a day out; in 2019, for instance, the number was around 28,000, with 545 Rotary clubs in Britain taking part. As Soo described it, "KidsOut is very much a Rotary Initiative. Kids Out cannot carry on without Rotary!"

In 2012 the charity launched Fun Days - when disadvantaged children across the UK are taken on a fun day out which "helps them remember what it is like to just be children." Rotary Clubs that organise a KidsOut outing can get £5/child and a free baseball hat for each child; they simply need to fill a form and organise the event.

Remarkably, in 2015, KidsOut became the only charity nationally to support every child in a Women’s Aid Federation refuge through the provision of toys, days out, workshops etc. These children are vulnerable and have a high risk of suicide, being runaways etc. Of course, things changed with the Covid pandemic so, instead, the charity sent out Toy Boxes to every child in a refuge. "We don't let anyone miss out," said Soo.

Outings have started again, and a Christmas-time outing allowed around 168 kids to have a "truly special day out" at Winter Wonderland in Hyde Park.

A recent initiative has been "World Stories"- a collection of fairy stories from around the world in a number of languages which helps youngsters with their understanding of each other. These stories can be read, listened to and downloaded in English and the original language - all for free. (You can watch a video about these here and visit the website here.)

KidsOut receives its funding from a number of sources, including corporate donations and fundraising events (such as "Question of Sport" events), manufacturer donations (toys etc.), government grants and funds raised through Giving Tree (where people can buy a gift for children). Referring to the latter, Soo suggested people should "ditch Secret Santa" and do a giving tree instead!

The outings can bring great joy to youngsters – and to volunteers. Soo told us about her own "Rotary moment" where, at one event, she saw children running with excitement towards Santa. “They all thought they were so special," she said.

KidsOut has 3 Trustees and 12 Ambassadors (1 for each Rotary district in the country). There are only 9 paid employees, and Soo estimates that for every £1 donated, 91p goes directly to providing something for the children.

"Just imagine," said Soo as she wound up her talk, "you are a child that has never received a gift or walked on a beach...but instead have lived in fear of abuse" - those are the children that KidsOut is trying to help. “These children CAN have fun and they CAN be happy”.

You can learn more about Kids Out here.

If you would like to help with the process for producing World Stories, please email worldstories@kidsout.org.uk.

You can learn more about the Rotary Club of Whitstable here.