A trip on the sailing barge Mirosa 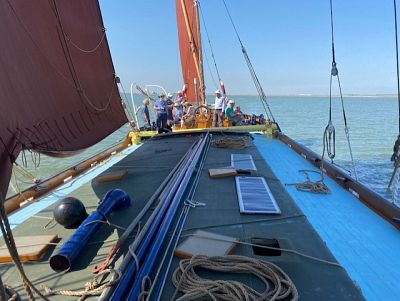 Once again, our Rotarians and guests had the opportunity to experience a trip on the sailing barge (SB) Mirosa - they were incredibly lucky as the weather gods looked down on them and they enjoyed a lovely outing in the warm sun.

This was the seventh trip on the Thames Barge that Rtn Brian Dobinson has organised for us via out Vocational Services Committee*. As regular readers may recall, some of our Members travelled on the barge back in summer 2019, when they had a rather damp and windy outing! There had been plans for a trip in 2020, but Covid-19 scuppered those. A few of those who went on the 2019 trip went again on this one - notably one of our Past Presidents, Richard Kemball-Cook. Richard, a keen sailor, was happy to lend a helping hand on deck.

Here, one of our non-Rotarian guests, Viv Hird, shares her account of the recent trip:

"After driving down a long, narrow, country lane (to arrive at the old Harty Ferry slipway at Oare Creek), we noticed several bird watching couples parked alongside the car park emerging  from their cars with binoculars. The spot was obviously popular with nature lovers.

Looking out to sea, I could see this large flat-bottomed barge waiting for us. The SB Mirosa is still powered by sail, unlike most other barges which have an engine.

With some excitement, we walked down to the water's edge to climb aboard the small motorised boat called a tender waiting to deliver us. We were dressed appropriately for our little trip - including Wellington boots!

After boarding, we went below deck (via a ladder with, thankfully, a bannister). There were already several different Rotary Club members sitting there, so it was an ideal time to introduce ourselves to each other. We were served refreshments by Captain Peter Dodds and his wife, Sally: tea/coffee and croissants, served with amazing apricot jam!

Having enjoyed the refreshments we all climbed back up on deck and sat 'fore and aft' in the glorious warm sunshine, surrounded by breathtaking scenery while gently drifting along. The majestic dark scarlet sails were a sight to see as they were hoisted up (no mean feat) by the Captain and his friend, Frog, another barge owner.

Gently drifting along the Swale, we enjoyed looking out at countless acres of the Emley Nature Reserve; the Church of St Thomas the Apostle at Harty in the far, far distance..... a treasured gem according to Trip Advisor; the King's ferry vertical lift bridge and the Sheppey Crossing. Our tranquility was occasionally shattered by jet skis determined to accompany us both up and down the Swale. While on deck, we also had the opportunity of seeing Spitfires on two separate occasions flying overhead.

At 12-ish we ate the packed lunches that we had taken with us and were offered tea/coffee (or wine!) by our hospitable Captain; we continued lapping up our lazy day in the sun.

At around 4pm we were invited to climb below deck where once again we were served tea - this time served together with scones, jam and cream.

All too soon, it was time to say goodbye to Captain Peter, Sally and their lovely collie, Lexie. What a delightful, welcoming team the three make!

The day was simply magical."

- Viv Hird
*Our Vocational service committee seeks to show us something of the working life of others, and Brian sought out the  SB Mirosa as the barge has never had an engine; this means everything has to be done under sail, which demands great skill. The barge, built in 1892, is in beautiful condition; it is thought to be the closest to the original specification of all the surviving spritsail (4-sided sail) barges, having hemp rigging and flax sails. With her huge lee boards raised she can be taken up tiny creeks as she draws only 3”6’’  - and she can even be sailed backwards for short distances. They used to say barges like her could be sailed "by a man boy and a dog" - and, of course, without a drop of carbon going ito the atmosphere!
Picture: View of the deck of SM Mirosa. Picture credit: Richard Kemball-Cook/Rotary Club of Canterbury.