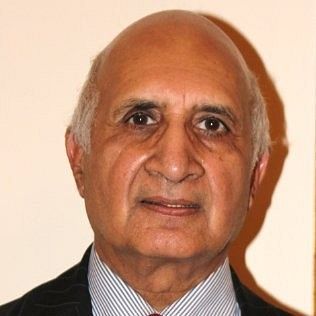 It was a treat to hear one of our members, Dr Farrukh Hussain, give us some insight into the world of psychiatry from his own perspective as a consultant psychiatrist.

Regular readers will recall that Tim Cooke spoke to our members recently about St Augustine’s Hospital (known at one time as “Kent Lunatic Asylum No. 2”). Tim told us about his own recollections of working there. This prompted Farrukh, who also worked at St Augustine’s for many years as a consultant psychiatrist, to give us a talk about psychiatry in general while touching on his own long career in the field.

Farrukh started his talk by telling us some basics about psychiatry – first about the terms “psychiatry” and “psychology”, which are often mixed up by the layman.

He told us that the two terms are in fact very different. Psychiatry is a branch of medicine – you first need to qualify as a doctor, after which you go on to specialise in mental illness. Psychology, on the other hand, is the study of human (or animal) behaviour. Psychologists may specialise in many fields e.g. in child behaviour. Sometimes psychologists and psychiatrists work together on cases – for example, to assess patients using dementia tests, personality tests and/or IQ tests.

Every day we hear about mental illness on the news and are told of the lack of resources to provide the required care. Farrukh told us that for some reason there’s some stigma about working in the field – and told us this is one reason why he thinks there’s a shortage of new recruits.

Dipping in and out of dry humour during his meandering talk, Farrukh peppered his talk with plenty of quotes, anecdotes and stories. One anecdote that he shared is said to be about Sigmund Freud (the renowned Austrian founder of the field of psychoanalysis) – it seems that a woman once asked him what his definition of a normal person was. His response was: “Show me the normal man…and I will cure him”!

Farrukh went on to talk about other terms the public mixes up. Many of these terms have now fallen out of use – possibly because of the negative connotations they now have. The first term was neurosis. This, he told us, refers to when a person is ill and knows they are ill. A neurotic person does not have any hallucinations or delusions. With psychosis, however, a person has loss of insight; they don’t know they are mentally ill. For example, they may hear voices, have visual hallucinations, be manic-depressive and have mood swings. Classic examples of the latter are Van Gogh (who experienced psychotic episodes and delusions) and Winston Churchill (who was prone to depression – a condition he referred to as his “black dog”).

Another term used by psychiatrists that Farrukh mentioned is the term learning difficulties. The term refers to conditions which, as the name suggests, make learning difficult; this includes conditions such as dyslexia and dyspraxia. People with learning difficulties once used to be referred to as being mentally sub-normal, mentally insane – or even other derogatory terms. Thankfully times have changed. Nowadays, Farrukh told us, the ICD (International Statistical Classification of Diseases and Related Health Problems)-10 is used to classify diseases and health problems.

Following this brief introduction, Farrukh went on to tell us about some treatment options for psychiatric illnesses, both current and historic.

At one time, tranquilisers (such as Valium or Librium) were widely prescribed by psychiatrists – but these “fell out of fashion” somewhat over the years due to being addictive, and were often replaced by antidepressants. More recently, other groups of drugs have also used to treat psychiatric disorders. Farrukh told us of briefly of the ongoing research into new treatment options for some conditions. For example, he spoke about the drug Aducanumab for the treatment of Alzheimer's disease. Early trials suggest that the drug leads to improvement in language skills and in the ability to track time and place. Further trials are going ahead, giving hope for patients with dementia.

Farrukh told us that mental health problems are very common across all countries and cultures. Everyone is prone to them. However, things have changed with time. When he started working in the field, it was estimated that around 1 in 10 people suffered from mental illness. Now, especially since Covid-19, the figure is thought to be closer to 1 in 6.

Some people with mental health issues have serious problems – e.g. behavioural problems, psychiatric disorders, or dementia. Other cases are milder; nonetheless, patients are often concerned about the stigma of psychiatric illness, finding that jobs and relationships including marriage are affected. In fact, Farrukh told us, the whole family may suffer from the stigma.

Touching on history, Farrukh told us that psychiatry can trace itself back to the times of ancient philosophers such as Hippocrates and Aristotle; but in those days the disorders were thought to be the result of an imbalance in “humours”, causing what we would now call physical and mental illnesses.

In the 16th and 17th century people started to talk about witchcraft; many people with mental health issues were probably thought to be witches due to their behaviour. It was at this time that people thought to be witches were “ducked” in water using a ducking stool. (He reminded us all of the ducking stool which we can see on the banks of the Stour here in Canterbury).

Farrukh next went on to talk about different branches of psychiatry. Child psychiatry, as the name suggests, refers to the study and treatment of children. For example, some children develop behavioural disorders at a very young age (this might, for example, include repetitive hair pulling, known as trichotillomania). Adolescent psychiatry focuses on adolescents who may, for example, have problems relating to sexuality or addictions. Adult psychiatry, in which Farrukh specialised for over 40 years, deals with a wide range of conditions. Farrukh also worked in psychogeriatrics (or psychiatry of age) – which focuses on psychiatric conditions associated with old age.

Farrukh also mentioned the field of neuropsychiatry, which focuses on conditions that develop after nerve system damage e.g. brain surgery. Nowadays, one of the most active branches of psychiatry is rehabilitation and social psychiatry. This involves a systemic approach to the treatment and management of those with mental illness. Another field of psychiatry – that of psychosomatic illnesses – focuses on emotional problems that lead to physical health conditions such as asthma and epilepsy. Finally, we learned that perinatal psychiatry focuses on conditions that arise during pregnancy (when it's unsafe to give conventional psychiatric drugs, so patients need other forms of treatment).

Farrukh talked in more detail about one set of psychiatric conditions that mainly affect adolescents and adults: eating disorders. These include conditions such as anorexia nervosa and anorexia bulimia (which Princess Diana was known to have suffered from). These disorders predominantly affect females, although they can affect males too. Often, it seems, the person might work closely with food. The condition can become so severe that the person becomes a “living skeleton”. Farrukh gave some examples to illustrate the seriousness of eating disorders, telling us how his professor had always emphasised that cases of anorexia should be taken seriously.

Farrukh’s own postgraduate training in psychiatry started in the 1970s, when he studied for and gained a Diploma in Psychiatric Medicine (from Dublin, Ireland). Eventually he went on to become a Fellow of the Royal College of Psychiatrists (FRCPsych); he became a consultant in the late 1970s. At one time he was part of the Community Psychiatric Team in Herne Bay, working there together with junior doctors, GPs and community psychiatric nurses. He has worked for many years as an expert witness and at one time carried out work for the Ministry of Justice. As mentioned already, he worked at St Augustine’s Hospital; he remembers the first question at his interview was “Who was St Augustine” – to which he replied “Which one, the Archbishop and founder of the English Church, or the one who’d been a Pope?”

The Lunacy Act of 1845 changed the status of those with mental illness to patients, and led to the creation of psychiatric hospitals - with all but the largest former mental institutions being closed (the smaller institutions were replaced with psychiatric wards in general hospitals and community services).

Farrukh felt that St Augustine’s Hospital had five factors that helped make it successful – it had cheerful surroundings, there was plenty of space for patients, there were recreational grounds, “inmates” were not overlooked and they were not disturbed by strangers. As Tim had previously told us, the hospital was set in acres of grounds and was pretty much a village on its own, with a butcher, baker, farms and staff residences. The community was self-contained – it even had its own cricket team, band, seamstresses, farmworkers, laundry, light-man and rat-catcher! In effect, people could be born, live, die and be buried there. The hospital opened with 870 patients; by the time Farrukh worked there the number had gone up to 1,700, and by the time it closed it had around 2,000 patients.

During the second World War Oak House (one of the buildings at St Augustine’s) became a special unit for soldiers and other military personnel, treating those who suffered from conditions such as the condition we now know as post-traumatic stress disorder (PTSD).

Farrukh joined the hospital from Sheffield, after it had suffered bad press about some of the treatment there; he felt he was selected because he was an outsider. He had worked in Sheffield with a Professor of Psychiatry, a German Jew who came to UK to escape from Nazis; a remarkable man who himself was admitted to a hospice the day after passing his files across to his colleagues, never having letting on that he was dying of cancer.

Farrukh has been a Rotarian for over 50 years, during which time he has seen many changes in our Club, including the inclusion of women members.

Over the years Farrukh has worked with several Rotarians in different contexts. In Sheffield he worked with David Nauman. Former member of our club, Ian Wright, had worked with Farrukh in an admin post, and both Deborah Connolly and David Barton had been doctors with whom Farrukh had worked. He also worked, almost literally, alongside Shawkatur Reza Chowdhury, an ENT Surgeon and father of another Rotarian, Julie Reza, when both doctors had held adjacent outpatient clinics at Kent & Canterbury Hospital.

Returning to the topic of psychiatry, Farrukh spoke about community psychiatry. We learned that this had started in the USA, but took off here when the asylums started to close down – especially following the actions of Conservative Minister Enoch Powell, who closed parts of psychiatric hospitals so that patients would be cared for in the community.

Finally, Farrukh went on to talk about one notorious treatment for psychiatric conditions – electroconvulsive therapy (ECT), the giving of electric shocks to treat certain conditions. We learned that a form of ECT was first used by the Romans, “pre-electricity”. It seems the Romans had used electric eels to treat soldiers suffering from battle fatigue!

We learned from Farrukh that ECT was only used in rare cases of severe depression. The patients had intravenous anaesthetics before a very short pulse of electricity was administered. Despite the fact that the technique had some success, it looked disturbing and was a treatment that was never really liked by the public (likewise lobotomy, an operation to cut off the connection of brain fibres to the frontal lobe of brain that controls thinking and behaviour and which, although successful at treating certain conditions, was associated with other impairments).

Farrukh’s talk generated a good deal of discussion about the treatment of mental health over the years and conditions such as drug or alcohol dependency.