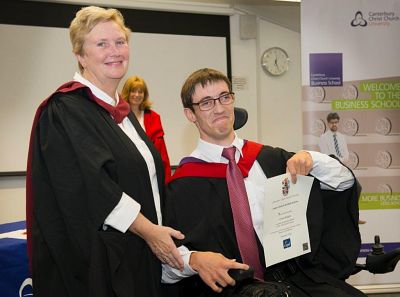 It’s always very interesting to have new members tell us about their work and careers, so on Tuesday we heard from Maxine Blades about her career in Human Resource Management.

Maxine (who joined us in January) has had a number and range of jobs during her career, but working to improve people management in organisations has been key throughout them all. Her working life can, in effect, be divided into two parts – one centred on her professional practice, the other focussing on higher education.

Maxine’s career started back in the mid-1970s, when she joined DH Evans in Oxford Street. There, she worked as a retail trainee and also a staff training assistant – and it was the latter that first got her involved with staffing matters.

In 1976, Maxine went to Darwin College of the University of Kent at Canterbury, where she took a BA (hons) in Industrial Relations, Politics and Government. The course also covered social and political history. Whilst studying at the University Maxine saw the aftermath of the ‘Winter of Discontent’, marked by widespread strikes – including by refuse collectors. Maxine recalls the football pitch behind Darwin College being used as a rubbish tip.

In September 1979, Maxine joined Spicers Ltd., (part of Reed International), based in Sawston. At the time the company’s factories used to be a pre-entry closed shop – which meant all printing staff had to member of a union before getting a job there. There, Maxine worked in Personnel Administration – she was involved with recruitment, selection, staff induction, training and personnel enquiries.

Spicers was the type of company that had taken a great interest in their workforce. It had built houses for its employees in the 1930’s and funded a sports and social club on the factory site. Every June there would be outings for pensioners. One employee even completed 50 years of service there – having started at the age of 14, including service in the 2nd World War. Spicers marked this by picking the employee up in a golden Rolls Royce and taking him and his wife to lunch with the Company Directors. Finally, there was a party to celebrate – which the company also paid for.

Primarily a manufacturer of envelopes, Spicers also became a wholesaler of office products via the Spicers catalogue. Maxine shared a picture of one of the envelope machines – apparently there were about 40 in one large room, and they made around 5 million envelopes per week. But the machines were loud and hot so finding staff for night shifts, when ambient noise levels dropped and the sound became more noticeable, was a tough task. Nevertheless, those who liked to take part in other daytime activities, like fishing, often took on the job.

During her time at Spicers Maxine did her Associateship of the Institute of Personnel Management. She also found herself responsible for company cars. That, it seemed, proved challenging; the cars were status symbols, with make, model and colour indicating how high up the ladder staff were. The MD, for instance, had a chauffeured Jaguar, while there were endless arguments over what cars others would get. Maxine had a Vauxhall Cavalier Mark II, which she loved.

Maxine also showed us a picture of Spicers’ central warehouse in the mid-80s. It was vast, with fork lift trucks and crates full of products.

From May 1991 to June 1997 Maxine worked at the Anglia Ruskin University, specifically at the Anglian Business School where she became a lecturer and module leader. She also became a Chartered Member of the Chartered Institute of Personnel and Development (CIPD).

In 1997, Maxine had her first daughter, Andrea. Her family moved to the USA because of her husband Kevin’s work and then, three years after her first child, her second daughter, Lauren, was born. In 200,  they returned to the UK and Maxine joined De Montfort University at Bedford. In 2004, the family moved to Stelling Minnis and Maxine joined East Kent College. Later she joined Canterbury College, working part time while raising her girls. In 2005 she took a teaching post at Canterbury Christ Church University, working as an associate lecturer at first. Her specialisms included employee relations, employment law, employment development, and employee resourcing.

From 2010-2016, Maxine became a full-time academic member of staff and worked as Programme Director of Postgraduate Studies in HRM, and well as Faculty Director of Quality. Maxine also became the County Chair of the CIPD.

It’s clear that Maxine enjoyed her academic career. Showing us a picture of her attending a student’s graduation, Maxine said: “It’s very rewarding to have students surpass even their own expectations!”

Maxine also keeps herself busy with other things. She is the Chair of Governors of Stelling Minnis Primary School and part of Canterbury Trefoil Guild, which supports Girl Guiding. Aside from that she’s also busy being a wife to Kevin and mum to two University students. She is now, of course, also busy with Rotary!

Picture: Maxine with one of her students, Chris. Picture credit: Maxine Blades (reproduced with permission).