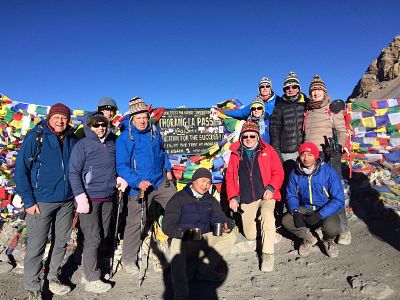 A packed room of Rotarians and their guests was treated to an exciting talk by PP Richard Kemball-Cook as he related his recent travels at 17,400 feet high, alongside the 'Annapurna massif' in the Himalayas.

Richard's talk had the audience enthralled, especially as it was accompanied by many wonderful pictures and videos.

Richard had heard that a long-term climbing friend was leading a geological field trip up and over the famous Thorong La mountain pass, which goes alongside the Annapurna massif. It's the highest mountain pass in the world. As Richard said: "My father was a keen Alpine climber all his life but never came to the Himalayas: this seemed a wonderful opportunity to add to a family tradition". So Richard decided to go along, accompanied by his wife, Cora.

The party of 11, helped by 5 sherpas and 6 porters, travelled 100 km over 8 days alongside Annapurna I, which is the 10th highest mountain in the world. (While Everest has been climbed many times, only 130 climbers have ever reached Annapurna's peak.)

Richard described the "hair-raising" car journey at the start of their trek, along winding roads adjacent to sharp rocky drops. The route for the trek itself passed through an area where the landscape demonstrated the huge forces arising from the collision of the Indian and Asian tectonic plates. Being with geologists meant that Richard learned plenty about the geology of the region, and he informed us that some of the topography was over 15-20 million years old.

He told us how the two tectonic plates came together - the Indian plate at 55 mm per year and the Asian at 25 mm per year. This led to the dramatic formation of amazing expanses of granite and marble. He recounted how snowfalls eventually led to compacted ice and the formation of glaciers. These then moved as a river of ice down the valley. (Richard compared this to the formation of Snowdonia). He also showed a huge lake formed by a dam of loose moraine material that could cause immense flooding if it collapsed.

The scenery along the way was magnificent. Richard showed pictures of snow-peaked mountain expanses, rugged rocks and bright blue skies. Occasional pictures had the audience gasping - one in particular that showed a rope bridge high up between two 'mountains'. Although they were nervous to cross such bridges at first, Richard laughed that the group got a bit "blasé" after crossing a few; fortunately, the group didn't need to cross the one in the picture. Interestingly, the bridges are used as thoroughfares and Richard showed one picture in which a herd of goats was happily crossing.

The group passed beautifully brightly coloured huts along the trek and were lucky to be able to stay in hotels overnight. However, taps often froze and Richard declined to describe the bathroom facilities. At one hotel they had the experience of sitting in hats and coats to watch Brad Pitt's 'Seven Years in Tibet' in a room at minus 10 degrees C. Food, Richard recalled, was "exciting" - though one sizzling chicken dish "smelled as if it had petrol as an extra ingredient"!

It was clear that Richard had great respect for the sherpas who took care of them during their travels - the sherpas always checked out tea houses and accommodation along the way and ensured the group were well looked after and that the catering was suitable. The lead sherpa had been up Everest more than five times and said he was now "having an easier life"!

While out there the group would do daily limbering-up exercises, much to the amusement of the sherpas. Cora (a yoga teacher) lead the class at times.

Richard described how the air got thinner the higher they trekked. This can have strange effects on the body and Richard described one point when he felt he lost control of his emotions and actually burst into tears. He found he had to keep his heart rate at 128 - if it went up to 129 he would start to feel panicky. He demonstrated the thinness of the air with plastic bottles that he had filled with air during the trek. Each had sucked itself in, vacuum-like, on reaching lower altitudes.

Each day the team started at 3am and edged further uphill, but each night they would come down a little in order for the body to "catch-up". Richard estimated at least half of the group had altitude sickness at some point. They hired horses as a precautionary measure, and in fact some members of the group needed them as "there was no going back". Luckily there was no snow, but the Sherpas wanted them down by 11am each day as the winds were extremely brisk and biting.

At one point Richard and Cora got separated from the team and got lost; he recalled calling their children "in case" they never made it. But they needn't have worried as they managed to make contact and two sherpas came back to find them; they were then taken back with a passing taxi of student trekkers.

Their descent was more gradual. Although there were lots of goats around, the land seemed very barren because of the wind. They passed tribal caves which are forbidden for most people. They were surrounded by sedimentary rock and lots of fossils. They came across one holy site, of importance to Hindus and Buddhists who would travel there by car. They also passed groups of young monks in red robes. At one point they travelled by boat to their lodge, from where they could see the beautiful Fishtail Mountain.

While on their travels the group bumped into youngsters doing a gap year teaching English to schoolchildren in Nepal; it was clear they gave a lot of care and effort to their work and weren't just in it for themselves. It served to remind Richard of the value of funds such as our Millennium Scholarship Trust Fund which supports such efforts.

All-in-all it seems Richard and his group had an awe-inspiring experience, and it was great to be able to have a taste of travel sitting on our comfy chairs.