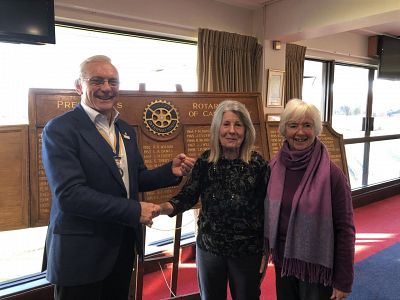 We were delighted to induct our latest member, Vivienne Hird, to our Club today. She is the first new member to be inducted to the Club this year and we hope there will be another joining in the coming months.

It's a sign of the friendliness and posivity of our Club that we've managed to recruit a new member despite our meetings and activities having been disrupted over recent months by the pandemic and its associated uncertainties.

Vivienne ("Viv" or "Vivvy") was proposed as a member by Rotarian Gill Dixon. It's through Gill that Viv first got to know about Rotary and our Club. During her introduction to Viv, Gill related the amusing story of how the two first met. It seems that some time ago Gill, who has a rather unsual car, saw what she thought was her own car parked in a different spot to where she'd left hers. For a moment Gill thought hers had been stolen - but it turned out to be Viv's! The two of them got talking and since then, Gill told us, "we've become very good friends!" Gill spoke often about Rotary when they met up and invited Viv to various Club meetings and events (including our "American Supper" style lunch last October) during which Viv got to know us.

Our President Stephen Thompson inducted  Viv officially and warmly welcomed her to the Club - adding that he hoped she would have "plenty of fun, and help others while doing so" as he handed her her official Rotary pin with her Rotary classification, "Events Management". (Some details about Viv's life and career are given below.)

Viv thanked Stephen and her "dear friend, Gilly" and told us all that she really hoped to make a positive contribution to Rotary. We look forward to working with Viv and welcome her to the Club.

Viv was born "A Maid of Kent" - but later moved to Hertfordshire. After leaving school she joined Hawker Siddeley Aerospace at Hatfield as a 'mailing girl'; several years later she left to travel. She rejoined the company in the early sixties and eventually became their Exhibition's Officer. Viv was the youngest member of management and one of a few females in a heavily male-dominated industry. She left the company "with marriage on the horizon".
Viv returned to studying when her children were at primary school - undertaking a Masters degree and TEFL (Teaching English as a Foreign Language) courses. Later, she was employed by Herts County Council to work with Bosnian refugees. She eventually returned to Kent and worked for some time for Kent County Council, supporting children with "special needs".
Now (she says)...she watches the grass grow!