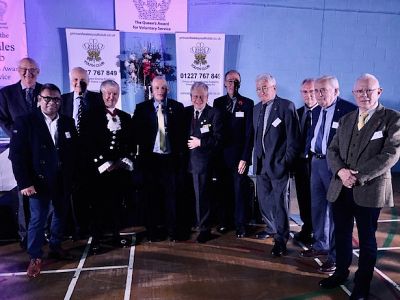 Earlier this month four of our members received special awards from the Vice Lord Lieutenant of Kent at a reception held at the Prince of Wales Youth Club during which the Youth Club was also presented with a Queen's Award for Voluntary Service.

Our heartiest congratulations again to the Prince of Wales Youth Club (POWYC) on receiving the prestigious Queen's Award for Voluntary Service which we learned of earlier in the year. The POWYC is one of only three organisations in the country to get this award - which is a top national honour - this year.

Joey Wicks, the POWYC's Co-ordinator, received the award from Vice Lord Lieutenant of Kent Richard Oldfield. Our Rotary Club's members, PP Tim Brett (President), PP Phil Abbott, PP Peter Hermitage, and PP Richard Kemball-Cook received special awards as they are Trustees of the POWYC. Fellow Rotarians Bob Anderson, Kailash Maunick, PP Alastair Scott, VP Alan Mepstead and PP Martin Ward are involved with the POWYC in other ways and also attended the event. PP Mike Talbot was due to receive an award from Joey for his longstanding service as a Trustee, but unfortunately Mike was unable to attend the event due to a prior commitment.

The POWYC was established in between the two world wars, aiming to offer opportunities to disadvantaged youngsters; it is now used by well over 300 youngsters every year. As regular readers will know, it's open to young boys and girls and actvities include boxing, other sports, dance and fitness. Their sports hall, dance and game studios, and one-to-one meeting rooms are all venues that can be hired.