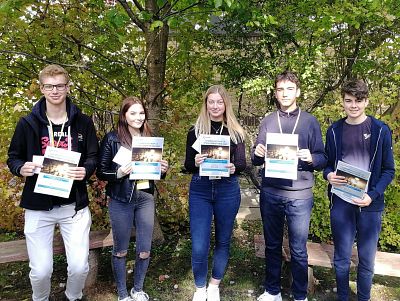 It is through Science, Technology, Engineering and Mathematics (STEM) that many future advances will take place, so it's important to support youngsters into these fields.

Taking the current pandemic as an example, scientists could help find new drugs and treatments, technologists could devise new ways of managing social distancing and communicating, engineers could help with the production of new tools and apparatus, and mathematicians could help with edpidemiological modelling. But of course, STEM could apply to many other advances too, not just healthcare.

We were very pleased that the prize winners of our "Pop Up STEM Competition" from Queen Elizabeth's School in Faversham (QEGS) have received their cheques - and also pleased to hear of the school's nomination for a TES award.

As regular readers will know, our Club, through its vocational committee, has supported a team from the school in the F1 in Schools Competition - an initiative to encourage younsters to engage with STEM. One particular thing we liked about the F1 in School teams from QEGS is that they encourage other youngsters, including primary school children, to engage with STEM.

Last year's team won the World Championships, which has encouraged more youngsters to be involved. This year's team has also done very well, having come third in the National Finals and won Best Display. Such success, with support from enthusiastic teachers, also meant that several of the winners in our "Pop Up STEM Competition" came from the school (pictured).

We also learned that the Science & Technology departments at the school have been nominated for the TES (formerly the Times Educational Supplement) STEM Team of the Year award. Our support for the school was mentioned in the application.

We wish the school well. We encourage youngsters everywhere to engage in STEM. The arts, however, are not forgotten and we hope soon to be launching a brand new competition to encourage creativity in youngsters. Watch this space!

Picture: Some of the prize winners from our recent competition were from QEGS. Picture credit: Queen Elizabeth's School in Faversham (reproduced with permission).