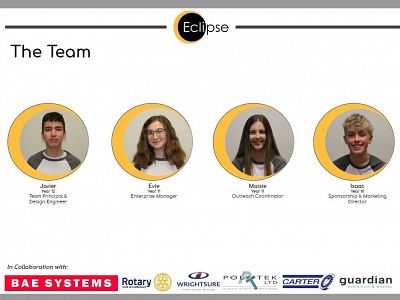 It was a great pleasure to hear from team "Eclipse" from Queen Elizabeth's School, Faversham, about their progress in the F1 in Schools competition when they came to speak to our Members the other day.

Our relationship with the F1 in Schools competition team at Queen Elizabeth's School goes back a while now, and started when Rotarian Brian Dobinson went to visit the school in relationship to our annual Innovation Competition and spotted the team's model racing car.

The team at the time, Team Evolve, went on to win the World Championships in Abu Dhabi. Now, Team Eclipse are carrying the baton forward into 2019/2021 and 2020/2021. Despite the Coronavirus pandemic the students have been hard at work – we already reported on their success at the National Finals (placed 3rd overall, with an award for Best Pit Display and a nomination for Best Design & Engineering Portfolio), so it was good to get some insight into their plans and preparations for the months ahead.

Two of the four-member team joined us by Zoom - Javier (Team Principal and Design Engineer) and Evie (Enterprise Manager); they are in years 12 and 11 of the school respectively. The other two members are Maisie (Outreach Coordinator, year 11) and Isaac (Sponsorship and Marketing Director, year 10).

After a brief introduction by Brian, the two teammates told us how they were managing to keep working given the lockdown and other restrictions over recent months, leaning heavily on technology for virtual meetings and sharing online documents. Right now, the team is not sure what form the World Finals will take this year, so continues to work towards next season.

A graphic of their timeline over the last few months was impressive, given that they still have to do schoolwork and exams and contend with the pandemic situation and associated changes.

The team was formally launched in December 2019, and not long after formation they took part in the Regionals (where they came 1st). They've managed to get some pretty impressive sponsors on board, including BAE Systems (their main sponsor), Polytek, Wrightsure, Carter and Guardian Exhibitions. We learned that although there’s no set budget for their car or other activities, they are limited in their spend to what they can raise from their sponsors. (Teams have to raise their own sponsor money - for everything from car manufacture and display development to their airfare. Interestingly, of all the schools in the Nationals, theirs was the only state school.) The team members have held a number of meetings with their sponsors and taken part in the Nationals. As well as prepping for the World Finals they are currently in the midst of "initial planning" for next season (2020/2021 F1 in Schools).

The youngsters showed us a smart trailer-like video of their car from their Nationals car reveal - with a sleek white body covered with sponsors' logos (including our own), a black wheel base and vibrant yellow highlights. Between Regionals and Nationals the group has made a number of changes to the car - including to the width of the car and the materials used. The wheel design has also changed totally; now it's ultra-low friction. We learned that the youngsters had to use calculus to work out the size of the wheel base.

The design of the main part of the body - or "monocoque" - allows the team to test different versions easily. This is important - not only do they want a faster car, they want it to be as eco-friendly as possible too, so want to be able to test different components. Priority has been given to car stability over aerodynamics. The speeds they’ve attained have already been faster than those attained by last year's World Champs - 1.079 seconds. But the team needs to keep a close eye on regulations as these get stricter and stricter and dictate certain dimensions and characteristics of the model cars.

The team members are also keen to explore ways of reducing the energy that is lost at launch, and are looking at systems to overcome this. A "jig" has been designed for testing designs. Not only are the team members improving the car design, but they are improving their own skills; they are also trying to improve team dynamics. (They already had to handle the dropout of two of the team earlier in the year to studies [‘A’ levels and GCSEs] and other commitments.) Roles are now clearer and there's less overlap of responsibility which makes things easier, particularly given the current social-distancing situation.

The youngsters plan a website and are advancing well on their 3-year plan thanks to the support of sponsors and their school.

As we've said before, given that one of the reasons that we chose to sponsor the team was that they are very active in encouraging others into STEM* and improve STEM awareness, it was good to know they are helping develop their own juniors and are busy with outreach activities (of which our meeting was one). Their primary schools project is still going ahead - 12 schools have signed up. The project involves teaching the younger schoolchildren about STEM and making paper prototype cars! They even teach about aerodynamics and they've bought a wind tunnel so that they can teach some basic physics. "Basically," said Javier, "they learn everything we've learned ... but in 1 day!" The team will also be interacting with the wider community as part of their outreach.

Javier and Evie were asked a number of questions from the audience - and had some suggestions for further outreach activities - before they were thanked once again by our President Alan Mepstead. We all wish them well in their F1 in Schools activities and have our fingers crossed for the World Finals, if they take place.