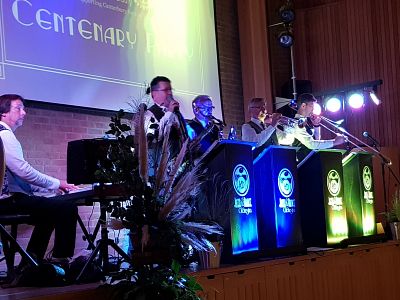 Our Members and guests enjoyed a wonderful Centenary Gala Dinner at Cathedral Lodge on the grounds of Canterbury Cathedral on Saturday. It was an event that had been looked forward to by many and it was a great joy to hold it at long last.

We marked our Centenary on the actual day back in February this year with a regular but "special" meeting - shifting our original plan for a 1920s-themed Gala Dinner to June because of the uncertainty around the Covid situation in the build up to the date. It was a huge relief for all involved in organisation that this time the event went ahead as planned!

Over 100 people attended the black-tie event, with many of the ladies wearing 1920s-inspired outfits wth plenty of beads, feathers and sparkle. A champagne (or elderflower drink) reception added even more sparkle to the evening as the guests congregated. Everyone then headed to the main hall, which had been immaculately decorated with 1920s-style floral displays of pampas grass and peacock feathers arranged by Jayne Ward and Sue Thompson (wives of PP Martin Ward and President Stephen Thompson respectively). As well as Rotary banners, the room had flags representing the five countries of Pentangular (the five European clubs of which we are one member). Each guest had a little hand-tied posy keepsake and commemorative menu/programme as a memento of the event.

Special guests for the evening included the Lord Mayor of Canterbury, Councillor Anne Dekker, the Lord Mayor's Consort, Ken Dekker; Lord and Lady Carey; Rotary District Governor (DG) 1120, Chris Brenchley; Assistant District Governor (ADG) Kevin Fielding; President of the Rotary Club of Margate (our parent club), Keith Daley; President of fellow Canterbury Club, Canterbury Sunrise, Jarle Tatt, and Sunrise's President Elect Sinitta Nightingale and husband, Ben. President of the Rotary Club of Dover (and former Member of our Club), Ian Wright also joined us. Jos van der Broek, the President of our Dutch Pentangular partner club Leiden, and his wife Loes, had travelled the furthest to be with us. Of course, plenty of Inner Wheel members were in attendance too.

Martin was Master of Ceremonies for the evening and opened the event by declaring "We made it!" - not just for managing to hold the Gala but for reaching the grand old age of 100 years!

Martin read an extract from the Kentish Gazette article of the 11th February 1922 that referred to our inaugural dinner when "the Mayor of Canterbury, Wright Hunt JP - the first President of the Club - was in the chair".

We then switched to video and saw François Marquis, the President of our French Pentangular partner Club St Quentin, and his wife Isabelle, give us a lovely 1920s-style greeting and toast (their club will turn 75 on the 20th June). Kristina and Clara, our club’s Mini Group Study Exchange delegates for the meeting in St Quentin, also joined us in Canterbury.

Lord Carey, honorary member of our Club for life, was invited to give us his "thought for the day". He spoke of the collaboration of friendship of Rotary Clubs across the world and said "we shouldn't underestimate the contribution that Rotary has made over the years". He ended by quoting words attributed to Eleanor Roosevelt: "Yesterday is history, tomorrow is a mystery, today is a gift of God, which is why we call it the present."

Next to speak was the Lord Mayor of Canterbury. She spoke highly of our work and contribution to the community. "Recipients of your generosity realise the impact that you Rotarians have on their lives," she said, adding "we are truly grateful for all your efforts and support. For that, on behalf of the City of Canterbury, I thank you and salute you," before she toasted a century of service.

Stephen then came to the floor and highlighted how, of the 100 presidents our Club has had over the years, 18 were in the room. They were asked to stand and were given a resounding round of applause. Our souvenir menus and booklets listed all 100 Presidents - with the latter also giving some of the newsworthy "events" that happened that year as well as a snapshot of our Membership as on 9th February 2022.

Stephen commented on what an "active and vibrant centenarian" our Club is - and gave the analogy of the swan or duck swimming along, looking placid while underneath its feet are paddling "nineteen to the dozen". He went on to mention just some of the projects we have worked on or supported over the last year alone, spending over £32,000 from our Charity account on the causes that we support - including helping youngsters doing their own charitable work and, in Bangladesh for example, supporting eye operations and the provision of safe drinking water. Through ShelterBox we have played a small part in helping those affected by the humanitarian crises in Yemen and Haiti, while supporting refugees from Afghanistan locally. We have raised well over £7,000 for Ukraine, with another fundraiser to be held soon. We have also continued to support our European Pentangular friends with their project for deaf children in Moldova. "Now stop," Stephen said "and just multiply all of that by the 100 years of our Club’s service to Canterbury. I think that you would agree that this centenarian is not asleep in a chair!" Addressing us all he said "When you leave here tonight be proud, hold your heads high and look Canterbury in the eye. Your contribution makes a difference to so many," and raised a glass in a toast to the next 100 years.

Stephen had one last task before the dancing commenced: to give recognition to two Rotarians as Paul Harris Fellows - this is given to a Rotarian, or a member of the community, that has made an outstanding contribution to the community, and is the highest "award" Rotary gives.

The first went to Rtn Graham Bough - partly for his Rotary service and active membership of the International Committee, but more notably for his work in the community, including his involvement with Canterbury Food Bank (where he was one of the founding Trustees and served as Treasurer and Bookkeeper) and his 20 years plus as a rugby referee. He is also an assessor of referees, a vital role that ensures high standards of refereeing and play.

The second went to Rtn Julie Reza for her "transformative" work on the Club's publicity. Through her involvement and efforts on various committees, the Club has also helped support a Covid lab as well as the aforementioned projects in Bangladesh. She's also been "the source of many bright ideas", including the Purple Recipe Book for Polio Plus and our Taste of the East fundraiser.

Next came President-Elect Tony Loughran's chance to surprise Stephen - with a Paul Harris Fellowship of his own! This was given in recognition of Stephen's stellar leadership over the past Presidential year. It was the first time a current President had been recognised as a fellow, but, as Tony said, "in our 100th year it seemed very appropriate".

Stephen joined Canterbury Rotary Club in 1994 - the third member of his family to join Rotary following his Grandfather John Thompson MBE and Father David Thompson MBE JP who were Presidents in 1947 and 1971 respectively. Previously he was Chairman of Canterbury Round Table, and was a Major in the Territorial Army (he was awarded the Territorial Decoration for his service). He has also organised the Club's collectors for the British Legion Poppy appeal and is a committee member of the Lord Mayor of Canterbury Christmas appeal.

Under Stephen's leadership the Club marked its Centenary and Pentangular's Golden Anniversary, all while cautiously emerging from restrictions due to the Covid pandemic. "We have enjoyed a fantastic year," said Tony, adding that Stephen "richly deserves the honour of becoming a Paul Harris Fellow".

With Stephen's award the formal part of the evening came to an end and the dance floor was cleared for everyone to enjoy a dance to live music played by the wonderful KD Dance Orchestra, who played a medley of lively hits and slow dances that spanned the decades.